Placed, the Madrona-backed location analytics startup that emerged from stealth around a year ago, has today released a study detailing which retailers are more likely impacted by the so-called “showrooming” trend. The study also examines how and where this trend may benefit one e-commerce retailer in particular: Amazon, incidentally a company that Madrona is known for having invested in early.

The study is one of the largest to detail showrooming to date – a term that refers to the way shoppers are now using brick-and-mortar stores to go hands-on with items they’re interested in purchasing, which they later order online for a discount. Last year, comScore’s U.S. Internet report stated that 35 percent of respondents engaged in the practice, and the numbers reflected it was a popular activity with younger consumers in particular – 55 percent doing this were 25-34, comScore found.

Today’s study from Placed looked at 1 billion U.S. location data points during January, sourced from nearly 15,000 U.S. survey respondents. comScore’s “mobileLens” panels tend to be larger in scope, but Placed’s core business is location analytics. It offers Placed panels and tools for app developers, which allow them to understand the real-world behaviors of their app’s users, for better insights and ad targeting purposes.

According to its findings, Walmart and Target were the two stores that could be most affected by the showrooming trend, with 25.2 percent of Amazon shoppers also visiting Walmart, and 10.7 percent also going to Target. Further down the list (in order) were Walgreens, CVS, Best Buy, Home Depot, Lowe’s, Sam’s Club, Dollar Tree, Costco, GameStop, Rite Aid, Kohl’s, PetSmart and RadioShack. But this is more about Amazon to real-world overlap – it’s not necessarily an indicator of actual showrooming behaviors. More on that below. 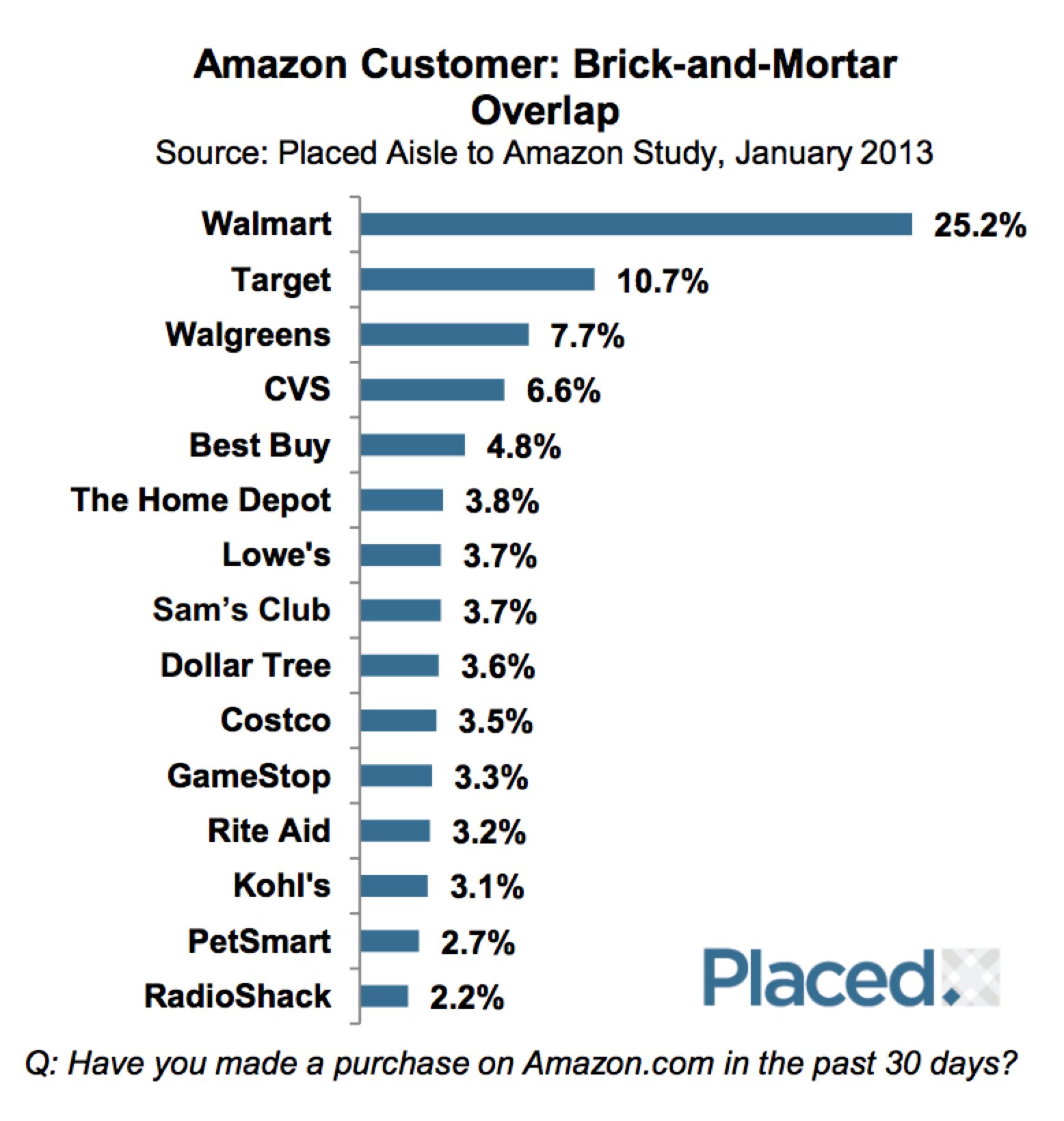 However, in terms of spending behaviors, Amazon customers who spent more than $100 online at Amazon.com in the past three months were more likely to shop in warehouse stores like Costco (52 percent more likely than average), BJs Wholesale Club (47 percent) and Toys R Us (43 percent). 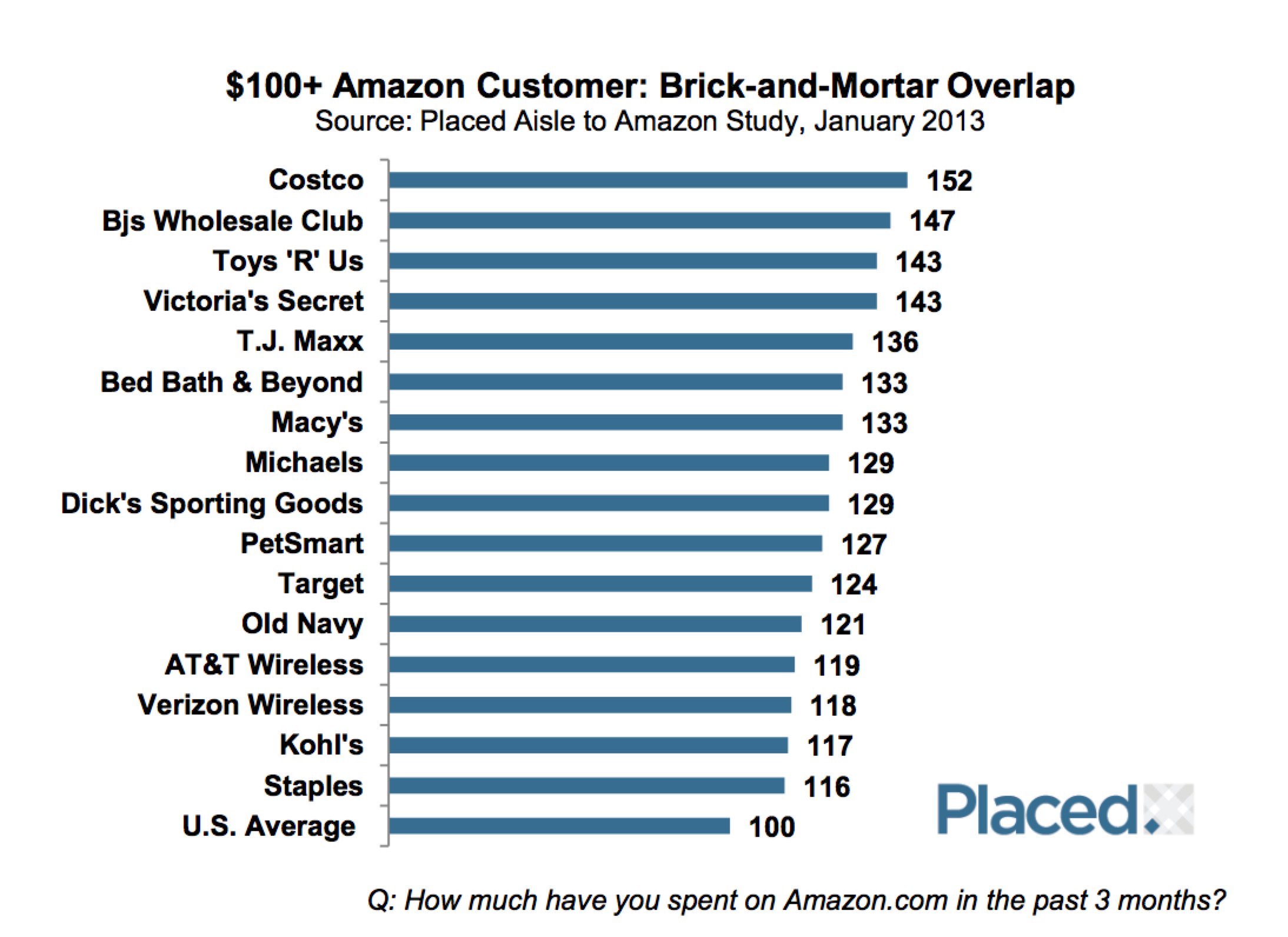 But the study’s key finding is not the above spending behaviors – it’s the impact to the real-world retailers. Best Buy and Target were the two top stores most affected by showrooming behaviors, said Placed, with “showroomers” 20 percent more likely to visit Best Buy than the average consumer, and 15 percent more likely to visit Target. Not so coincidentally, both of those retailers have previously announced permanent Amazon price-matching guarantees in recent months.

It’s Not Just Best Buy: Bed, Bath & Beyond, PetSmart, Toy R Us, Sears and More Are Most At-Risk For Showrooming

Walmart doesn’t do the same, however, but it also came out as “safer,” as showroomers are 10 percent less likely to visit Walmart compared with Target, and 15 percent less likely compared to Best Buy. Other at-risk retailers in this group included PetSmart (#2), Toys R Us (#3), Best Buy (#4) and Sears (#5). However, the most at-risk retailer is a bit of a surprise – showroomers are 27 percent more likely to visit Bed, Bath & Beyond than the average consumer. 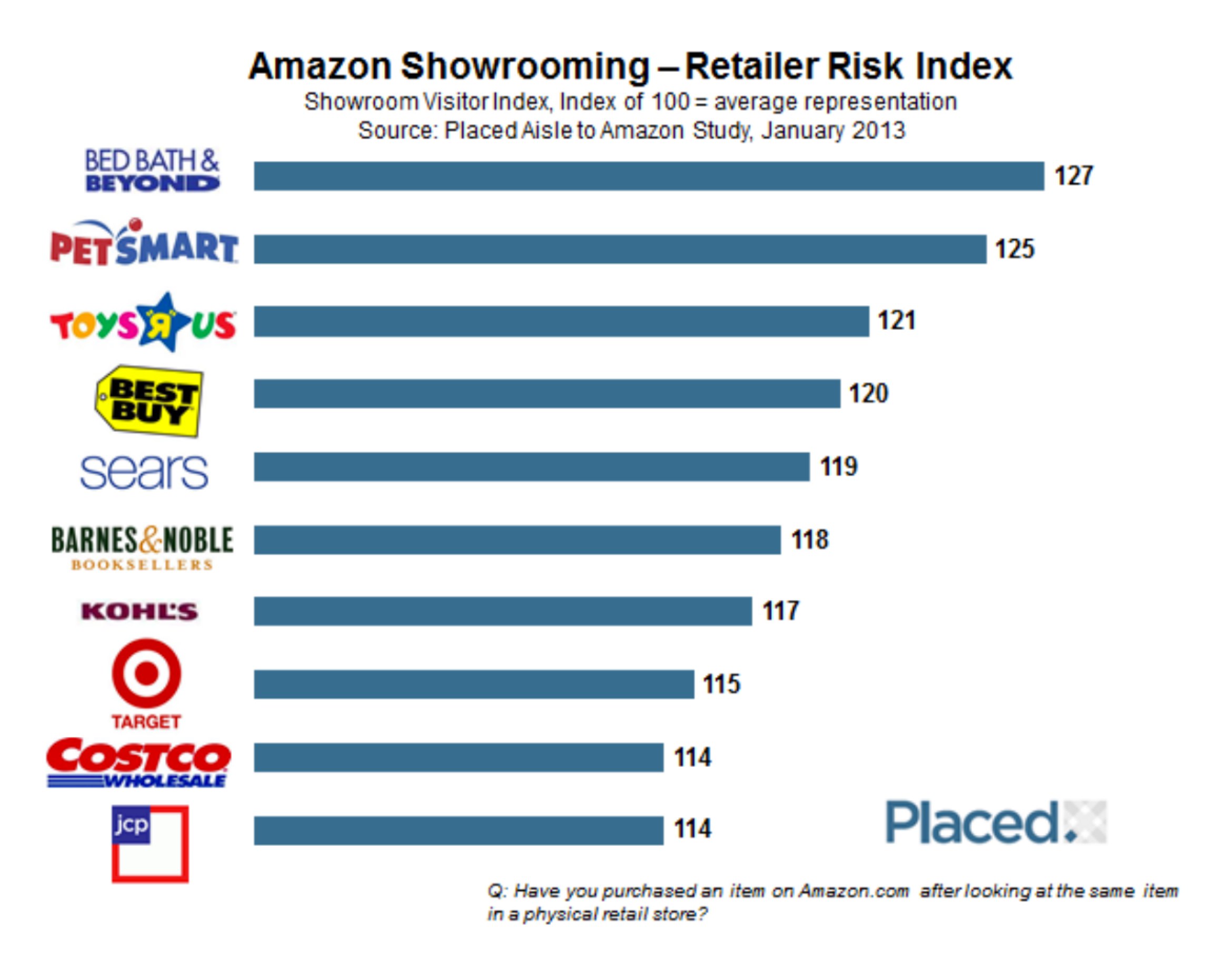 Showrooming gender lines were split more traditionally, with men more often engaging in the activity at places like Best Buy, The Home Depot and Lowe’s, while females shopped at Kohl’s, PetSmart, Bed, Bath & Beyond, Marshalls and Old Navy. 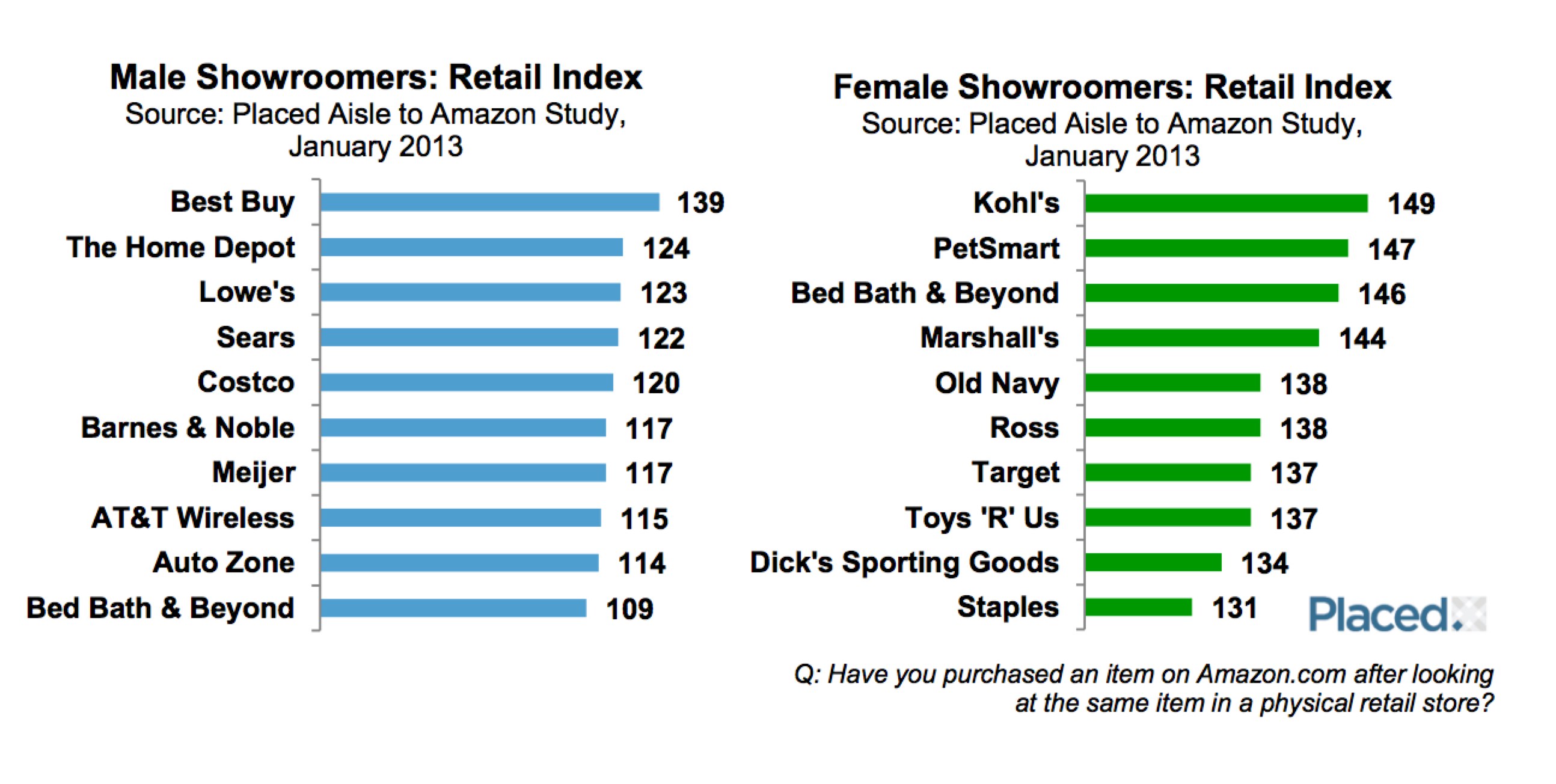 What’s interesting about this study is that Placed also specifically analyzed the segment of consumers who use the Amazon Price Check application – an app you could say was basically designed for showrooming. Among this group of app users, T.J.Maxx was the top real-world retailer favored by this group. (Note, though, that the study isn’t saying the app was used most here. It’s saying that among those who do use the app at retail stores, T.J.Maxx was a store these people shopped at more often.) Also popular were Costco, Office Depot, AT&T Wireless and Toys R Us. 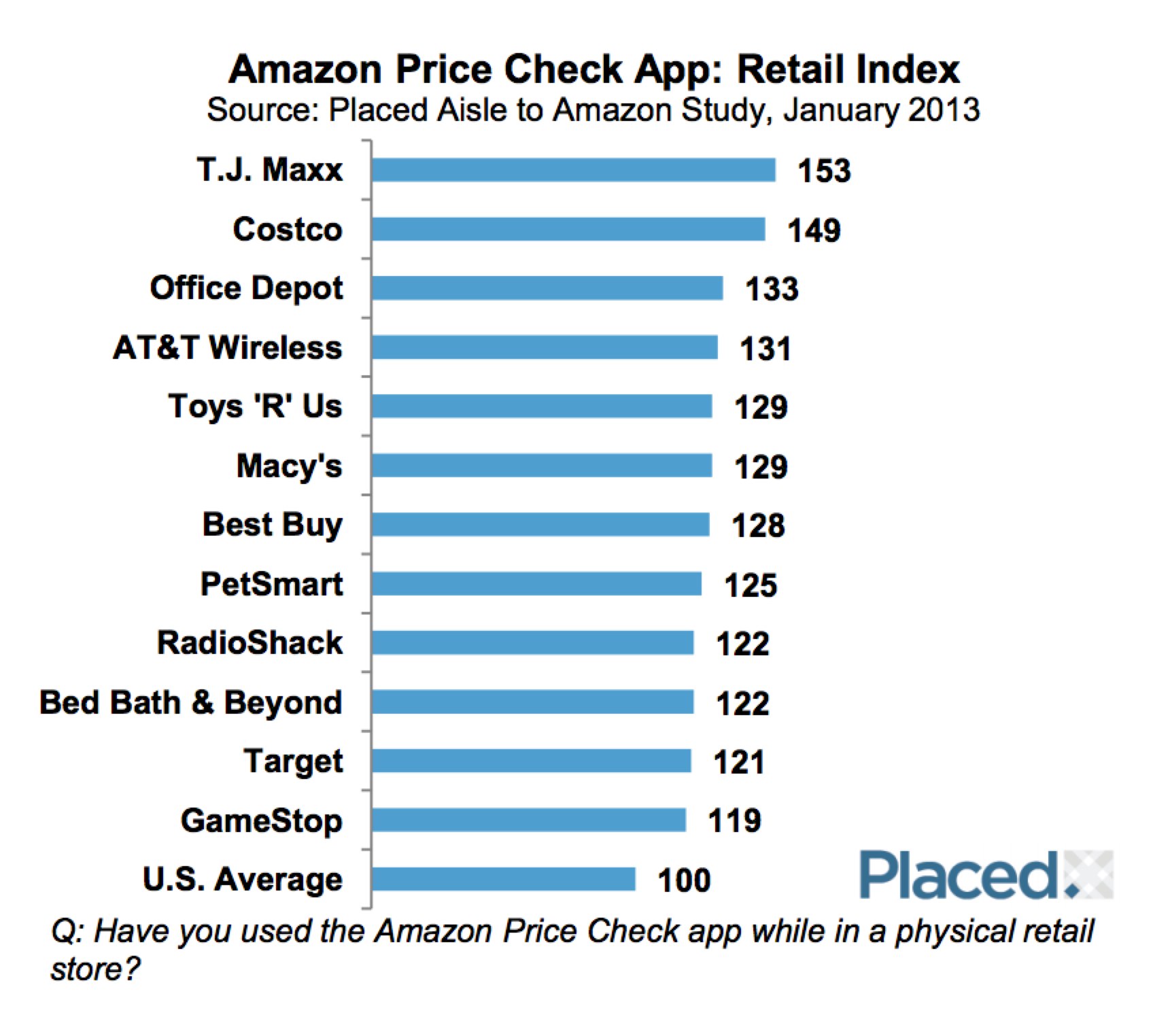 There’s more data in the full report. Overall it offers some interesting insight into the offline behaviors of shoppers, and those who may be engaged in showrooming behaviors. However, the report falls short of measuring more direct usage of barcode-scanning apps (the when, where and who), as well as actual conversions due to price checking on mobile. These are things that could theoretically be tracked not only by looking at Amazon’s own Price Check app, but also other apps like ShopSavvy, eBay’s flagship app and its barcode-scanning app RedLaser, buyVia, PriceGrabber, Decide, Google Shopper, and many others. But to do so, Placed would need to have agreements in place with other companies, which obviously presents a challenge in doing a more in-depth analysis.

We should point out that this study comes on the heels of a slightly contradictory report, which found that, at least in the case of consumer electronics, showrooming also leads to in-store sales, with 42 percent buying online, but 30 percent buying in the store after checking prices. For brick-and-mortar retailers, that means the best course of action is acknowledging that shoppers are doing this by price-matching when possible, offering competitive prices overall, and providing in-store services and assistance which e-commerce shops cannot.