Code.org, the new non-profit aimed at encouraging computer science education launched last month by entrepreneur and investor brothers Ali and Hadi Partovi, has assembled an all-star group of the world’s most well-known and successful folks with programming skills to talk about how learning to code has changed their lives — and how isn’t quite as hard as people might think.

As you can see in the five minute clip embedded above, the short film (nine minutes in its full length version) which was directed by Lesley Chilcott, known as the producer of Waiting for Superman and An Inconvenient Truth, is a who’s who featuring Mark Zuckerberg, Bill Gates, Jack Dorsey, Drew Houston, Tony Hsieh, Miami Heat player Chris Bosh (he studied computer imaging at Georgia Tech before joining the NBA), and many more. It’s a very human look at what can certainly seem to many as a dry or intimidating subject, and it’s really a pleasure to watch.

The watchability is key, Hadi Partovi told me in a phone call this past week, because the purpose of the film is to appeal to the mainstream, and particularly to young people. It’s an important grassroots start on solving a very big problem. 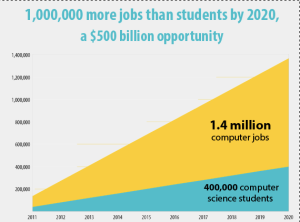 “Enrollment rates in programming classes are low, but what is worse is that schools aren’t even teaching it, even though this is the fastest growing segment of jobs in the country,” Partovi said, adding that nine out of ten U.S. schools don’t offer computer programming classes at all — and those that do often treat it as an elective that doesn’t count toward graduation, the same as, say woodworking.

Indeed, he pointed to figures (which are represented in the accompanying graphic and more on the Code.org site) that show the massive gap between the number of available programming jobs and the people graduating from American schools with the skills to actually do them — a hiring problem of which most people in the tech industry are painfully aware.

And filling in that gap of 1 million jobs could add as much as $500 billion to the U.S. economy — a fiscal cliff-sized number. Partovi put it like this: “It’s a big issue for our country. We’re trying to use immigration reform to help solve the problem, and that’s important, but the long-term fix really is that we should teach more people these skills.”

So what can you do to get involved? The first step is simple, Partovi says: Show the film to as many people as possible. Forward it to your friends and coworkers who are parents, forward it to your younger family members.

Then, there are several things you can do. If you’re a teacher, go to Code.org and sign the petition to get computer programming classes on the curriculum in your school. If you are an engineer, volunteer your time to help teach kids those skills. If you’re a parent, get your kid started with simple lessons on Code.org’s website or search for local schools nearby that teach programming.

It’s a big problem, but it looks like Code.org has made an impressive and thoughtful start in really starting to tackle it.