Rollbar (formerly Ratchet.io), an error tracking product for developers, is launching its product out of a beta today, following nine months of private testing. Founded by former Lolapps engineers and inspired by tools they once relied on internally, the new company is backed by a small, “pre-seed” round of funding ($250,000+) from Resolute.vc’s Mike Hirshland, Hiten Shah of KISSmetrics, and Arjun Sethi, former Lolapps CEO.

The startup was founded by one-time Lolapps CTO Brian Rue, who left the company in March 2012 after the merger with 6waves. He began work in May on what’s now called Rollbar along with Cory Virok, one of Lolapps’s first employees. Now a three-person team based in San Francisco, the company is going after a somewhat unsexy, but definitely necessary piece of development infrastructure: error-tracking. 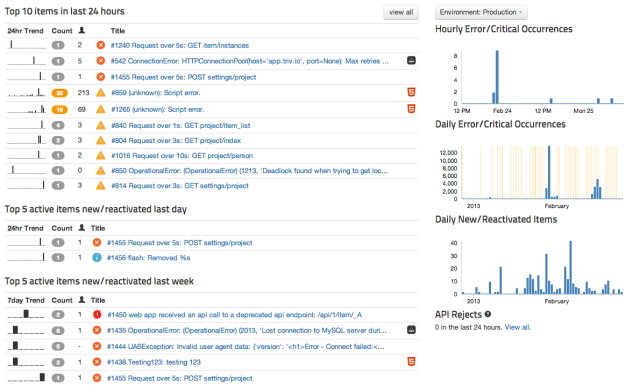 The core problem error tracking products solve, Rue explains, is that as developers are writing code, they break a lot of things. “With the previous generation of solutions for this, is that you could see what’s happening in your logs and get an email when there’s an error,” Rue says. But this solution isn’t that useful because if you get a single email, you don’t know if you’ve seen this issue before, or if it’s been fixed in the past. And you don’t know the severity of the issue. “So the core part of this product is grouping things together so you know what the history of each issue is,” he says.

With Rollbar, when you get an alert, it’s actionable because the issue is either new, or something which has been re-opened. You can dig in and see the history, as well as things like when did the issue start, was it caused by a certain employee, what services was it on, what browser was it on, what countries were affected, what parameters are associated with it, and more. 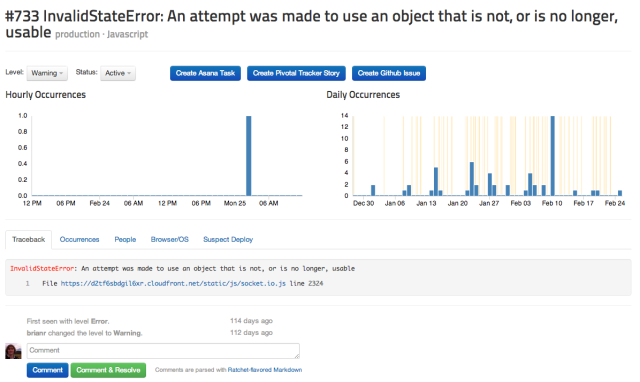 What makes Rollbar different from some of its competitors is its idea of severity levels – the service offers five of these ranging from “debug” to “critical.” For example, an error caused by the Facebook API being down wouldn’t be considered as severe as an issue that was affecting a mission-critical part of your system.

Rollbar’s feature set is also fairly rich too, with support for advanced search capabilities, deploy tracking, comments, automatic customer support emails (to tell them issues are fixed), forensics, and more. The system also has a strong understanding of what an exception is, and is able to de-duplicate error messages in order to tell which issues are different from each other, and which should be considered the same. 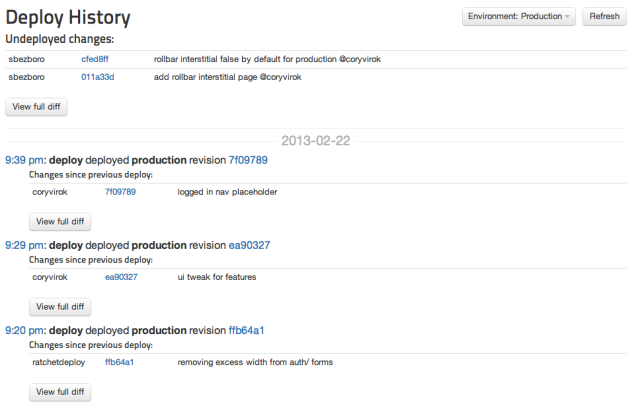 Rollbar’s JSON API is platform-agnostic, and works with most of the web languages, including Ruby, Python, PHP, Node.js, Javascript, and Flash. Work is now underway for iOS and Android support, coming in a few months time. Developers can get up-and-running in around five minutes, in terms of integrating the necessary libraries. They can then view the data and notifications in an online dashboard. This dashboard doesn’t yet include its own workflow, but Rollbar supports integration with GitHub Issues, PivotalTracker and Asana at present.

Customers pay for Rollbar on a usage-based model based on occurrences, starting at $12 per month and going up to $500 per month, depending on company size. Current customers include a number of well-known tech startups, including MapMyRun, Everest, Sincerely, CrowdFlower, InstaCart, InstaEDU, Spruce Media, MesssageMe, Homejoy, Bombfell, SocialSci, and others.