TokBox, the live video-chat platform that was acquired by Spain’s Telefónica in 2012, was one of the first companies to fully bet on WebRTC (the Web Real-Time Communication API), the quickly developing standard for plugin-free, in-browser video, audio and text chat. After launching its Chrome integration earlier this year, TokBox today debuted its support for Mozilla’s Firefox, starting with the bleeding-edge Aurora and Nightly editions of the popular browser. Now that TokBox supports Firefox, developers using its WebRTC-based OpenTok platform can write video-enabled apps that allow for chats between users on iOS, Chrome and Firefox.

With WebRTC now being part of Firefox’s early-release versions, users can expect to see it in the stable version of Firefox somewhere around version 21 or 22 (the stable channel is currently on version 19). 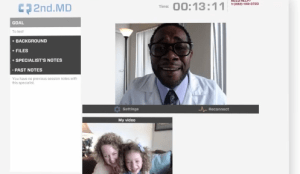 As TokBox CEO Ian Small told me last week, his company started working with Mozilla around last November. His team received early access to Mozilla’s WebRTC implementations and worked closely with the team there as Mozilla stabilized its own implementations of the standard. TokBox’s OpenTok platform ensures that developers don’t have to worry about the different WebRTC implementations on different browsers. The platform will also provide numerous additional services that a native WebRTC app doesn’t provide, including, for example, broadcasting to a large group of viewers and video recording. OpenTok, the company says, is currently being used by more than 70,000 organizations, including the likes of Major League Baseball, Ford, Bridgestone and the remote presence startup Double Robotics.

“Between Firefox 21 and Chrome 25,” Small told me, “we now have what appears to be a reasonably stable interop situation.” WebRTC, he argued, is still “in its infancy.” The native version in the browser can be used to connect two people, but the standard doesn’t offer features like letting developers connect more than two people at a time or even record sessions. Based on TokBox’s experience with WebRTC, Small also believes that the spec should accommodate alternative video codecs besides the Google-backed VP8 format. In addition, he argues that bandwidth allocation, which would allow apps to devote more bandwidth to the speaker, for example, should be part of the standard.

Despite these issues, however, Small believes that WebRTC will see “serious pickup” in the second half of this year, especially now that most of the key mobile and desktop platforms support it.