Nokia has just announced two new Lumia smartphones at its Mobile World Congress press conference – broadening its Windows Phone 8 portfolio to five devices and filling in some of the pricing gaps in the mid and lower end of the range. The two 3G newcomers to the Lumia line are the Lumia 720, which slots into the portfolio just above the Lumia 620, and a new entry-level handset, the Lumia 520, which pushes the price of Nokia’s Window Phone 8 devices to a new low of €139 ($180) before taxes, down from its previous low of $249.

CEO Stephen Elop described the new, more populous Lumia lineup as “the most innovative portfolio of products ever” — reappropriating the tagline the company uses for its Lumia 920 flagship to underline how some of the features found on its flagships are trickling down to more affordable devices. This includes its “super sensitive” touchscreen technology, which allows users to interact with the screen using a fingernail or when wearing gloves, and its digital lenses image filters and its Cinemagraph animated GIF creator.

“What we’re doing with this Mobile World Congress in many respects is taking some of the great innovation you’ve seen in flagship products like the Lumia 920 and we’re broadening that down through the portfolio,” said Elop. “We’re now at a point where you’re seeing an organisation which has undergone a great deal of restructuring and changes but now you’re seeing the full power and might of Nokia being applied to the broadest range of portfolio for the Lumia products.”

Nokia’s previous entry-level Lumia, the 620, was announced last December but still hasn’t launched in the U.S. However Nokia confirmed today that its new entry-level Windows Phone will be coming to North America, with T-Mobile U.S. set to range the Lumia 520 (pictured below) in Q2. 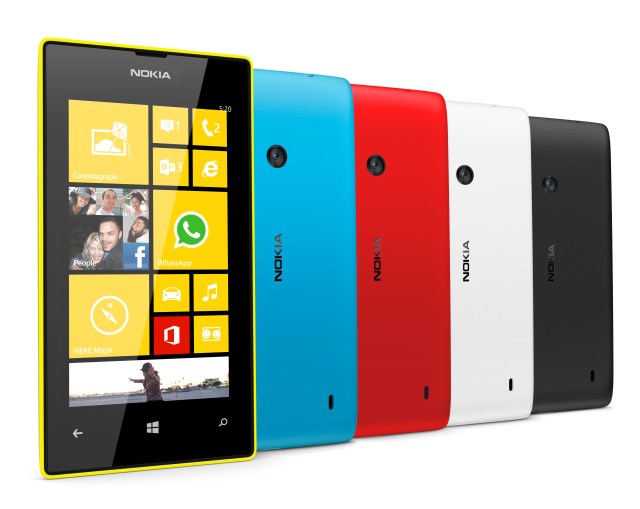 The Lumia 520 has a 4-inch LCD display with a resolution of 800 x 480. Under the hood the handset is powered by a 1GHz dual-core Snapdragon chip, along with 512MB of RAM. Internal storage is 8GB but there’s a Micro SD card slot to expand memory up to 64GB (not counting the 7GB of free cloud storage that comes with Microsoft’s SkyDrive service). The device also includes a 5-megapixel rear camera, plus the swappable shells featured on the Lumia 820 and 620 — in the same range of distinctive and bright Lumia colours.

The new mid-range Lumia 720 (pictured below), priced at around €249 ($330), is initially targeting the Asia-Pacific market — with China Mobile confirmed to range it in Q2. It’s unclear whether it will come to the U.S. later — Nokia said it has nothing to announce at this point. China Mobile will also range the 520. 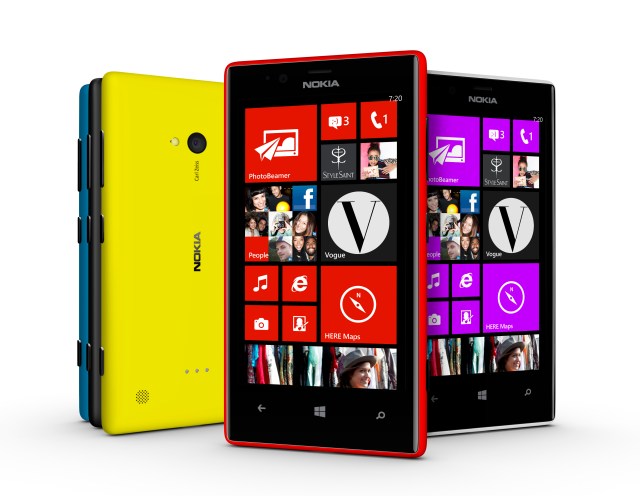 The dual-core 1GHz Lumia 720 has a 4.3 inch Clear Black display for improved viewing outdoors, with the same screen resolution as the Lumia 520. Memory and storage are also the same. Nokia described the handset as the “trendiest Lumia in product family” — talking up its sleek, rounded looks, including curved edges to the screen and a 9mm waist, which makes it the thinnest Lumia in the range. This handset is being targeted specifically at “younger, trendier, hyper social users.”

Aside from the device’s look and feel, the camera is the big focus with the 720 — thanks to its target audience’s love of social networking and photo sharing. Although the 720 is not PureView branded, it has a 6.7 megapixel rear lens, with Carl Zeiss optics (and branding) and an f1.9 aperture to allow in lots of light to boost low light photography performance. The front-facing lens has not been forgotten either — it’s a 1.3 megapixel HD wide angle lens, which allows for up to three people to squeeze into a shot so someone can take a self portrait with two friends.

Nokia has also added a new Lumia digital lens — called ‘Glam Me Up’ — which lets 720 users snap an enhanced self portrait using the front-facing lens, which then auto processes their photos to make it look more polished, giving them whiter teeth and smoother skin. The company said this feature had played very well with its target market of appearance-conscious consumers.

Despite rumours of a true PureView Windows Phone, Nokia had no high end Lumias to unbox at its MWC press event today (nor was there any sign of Windows tablet hardware). Its focus this year is evidently on bulking out and expanding the competitiveness of its mid-range offerings — in both Windows Phone and Series 40 products — to firefight the spread of affordable Androids, and presumably also to try to head off the threat from other low-cost newcomers, such as the nascent Firefox OS.