Kickstarter has seen its share of campaigns that spin out of control, but it’s a lot more impressive when spin is in control. Seeing that potential, a trio of tethered toys has recently cropped up on the site, with each appealing to different levels of rotational robustness. Here’s the spin on how they’ve turned out. 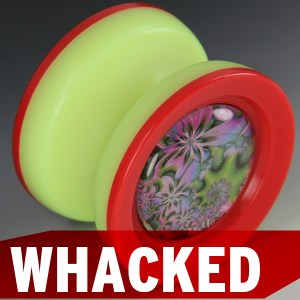 Whacked: Your Personalized Yo-Yo. His name is Ed Davidson, but you may know him better as YoYoSwing. And while he may not have put much effort into his line-drawing avatar, he is the creator of custom lathed yo-yos formed into unique shapes and covered with intricate designs. Seeking a broader audience, Davidson sought the narrative aid of an Xtranormal character. The animated Pilgrim makes the case for getting into mass personalization by pressing user-submitted designs into a glass dome adorning the side of a yo-yo.

Rewards ranged from $30 plastic implementations to $100 handmade personalized yo-yos using a choice of woods such as rosewood, yellowheart, tulipwood and osage orange.

Perhaps because it’s unclear why Davidson, who already has set up shop for custom yo-yos, would need funds up front, this dog has failed to walk. With about 10 days left, the campaign has attracted no backers toward its $3,000 goal. 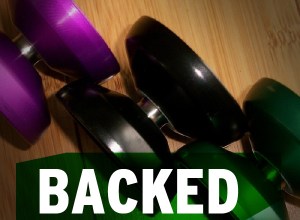 Backed: Civility Yo-Yo. As the web grew, it started to become more obvious that there would eventually be a website for virtually any interest and learning virtually anything. A great example of this is YoTricks.com. Once visited by Eliot Spitzer who quickly realized he mistook the site’s purpose, it is a leading destination for learning advanced yo-yo manipulations of all sorts. And while you can go around the world with any old Duncan or Yomega, the site sought a product optimized for the tricks it taught.

The result was the Civility yo-yo. Designed by Colin Leland, whose yo-yo swings wide in the world of yo-yo designers, the Civility is crafted of aluminum. It’s been expressly designed for the most advanced tricks taught at the site at which the toy was conceived.

Backers didn’t string the project along, raising nearly $23,000, six times the original $3,500 goal. Those 320 yo-yo aficionados are slated to receive a number of rewards between March and May, including a $50 wood yo-yo inspired by the Civility. The real aluminum deal was available for $75, but over 100 backers opted for the kit, which comes with 10 strings, lube and a stylin’ belt holder for impromptu trick requests at $85. Still, that’s less than the $90 that YoTricks.com expects to sell the physics-defyer to the body civic. 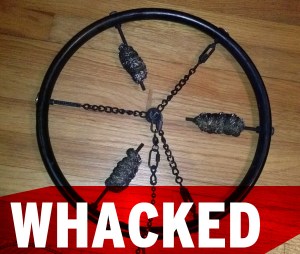 Whacked: Unidentified Flaming Object. Moving further up the exclusivity chain, the Unidentified Flaming Object (UFO) is not your father’s swinging object, that is, unless your father had some flame in his game. Brought to you by an individual with the carnival-themed nickname Sideshow Joe, the UFO is a spinning disk that’s even hotter than a Habanero pizza. As its creator notes, “I build things I can set on fire.”

The UFO is described by its creator as “the perfect blend between rope dart, yo-yo, levi wand and Frisbee.” And lest you stinkin’ intellectual property thieves have designs on claiming it as your own, be aware that Sideshow Joe has not sidestepped the U.S. Patent Office in applying for protection. Be also aware that he knows how to throw flaming metal objects with a high degree of precision.

The performer has offered a range of flammable rewards to backers, including pairs of fire nunchuks, a fire staff, fire snake wicks and double chain fire snakes up to 16″ long. The UFO itself begins at $175, with much of the funding going to purchase wicks in big spools, as well as chains, clamps and other materials potentially reclaimed from dungeons. However, up to this point, the fire sale has not been going well. With about 10 days left in the campaign, Joe has attracted only about $1,100 of the $6,000 for which he has asked. Despite the rewards being built-in compliance with guidelines from the North American Fire Artists’ Association and Joe’s aiming it at the “large fire-spinning community,” this campaign is on track to flame out.