Gaikai’s Dave Perry took the stage at the PS4 event today to describe how Gaikai would be adding cloud gaming elements to the PS4, which will make it possible to jump in and try games in the PlayStation store, make sharing with your friends a snap, and also invite spectators and get friends to help you by remotely taking over your game.

The PS Vita will also finally get a lot more useful, thanks to Remote Play. Perry said that the team has dramatically reduced transmission times, turning the PS4 into a server and the Vita into a client allowing for remote play of titles run on the PS4 direct to the Vita. It’s exactly like the Wii U, but with a controller you can walk away with and use as a standalone mobile console. 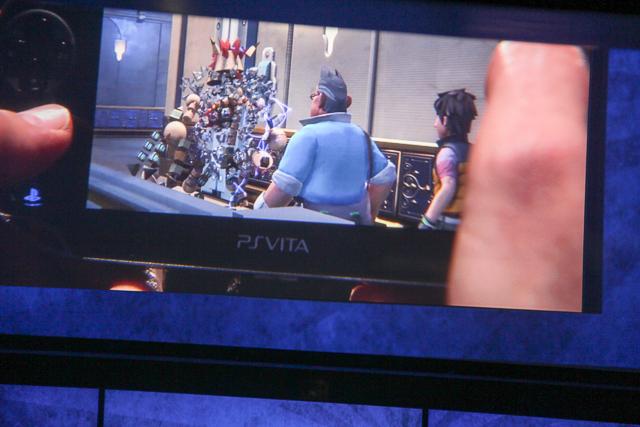 The ability to easily jump right into PS4 games and try out titles via streamed gaming is a huge addition for Sony, which had more limited demo capability in the PS3 PlayStation store which required sizeable downloads when it was even available (which wasn’t for every title). Inviting players to join and watch your game also includes the ability for spectators to chim with with on-screen comments as you play, and the ability to take over your controller to help you out if you run into trouble. It’s a much more social version of Nintendo’s handholding modes in recent releases.

Will gamers opt to call a friend, so to speak, instead of jumping on GameFAQs? That’s a good question, but clearly the company is doing everything it can to try and build a real social network, instead of the loosely affiliated group of often crude, sometimes racist anonymized gamers that made up the PlayStation Network of the past.