Average boat owners only use their vessel 14 days a year. That’s why Boatbound is brilliant. It’s a peer-to-peer boat-renting startup that lets you book everything from kayaks to catamarans to yachts for a day at a time with a $1 million Lloyd’s insurance plan. In his first interview about Boatbound, founder Aaron Hall lays out his plan to make boating more accessible to everyone. Ahoy!

“The two best days of a boat owner’s life are buying and selling their boat because of all the fees in-between. It’s a big capital cost,” Hall tells me. But if Boatbound can connect owners with just a few renters a month, it could offset that cost while allowing people to share on-water experiences. “We think the third best day is renting your boat on Boatbound. You get peace of mind that your boat isn’t just eating you up financially.

Hall, who grew up boating and spent six years in a boat club, gave me the superhero origin story of Boatbound. “The idea came about when I was in Texas with family out on a lake and was trying to rent a boat. The Marina said it had four or five boats to rent but they were all booked, but there were hundreds of boats sitting around. I thought ‘there must be an Airbnb for boats,’ but there wasn’t.” (Normally we’d stay away from the “Airbnb for …” cliche, but Boatbound embraces it.)

So Hall and his designer / co-founder Matt Johnston decided to pivot their previous venture, the 500 Startups-accelerated wedding e-commerce company Tailored. That company’s wedding-focused co-founder departed, and five remaining Tailored team members formed Boatbound. After working for almost eight months and hiring Airbnb’s first employee Nick Grandy as an advisor, Boatbound is now considering which investors to bring on to a highly oversubscribed funding round. That makes sense considering everyone wants to exclaim “I’m on a boat!” without having to buy one. 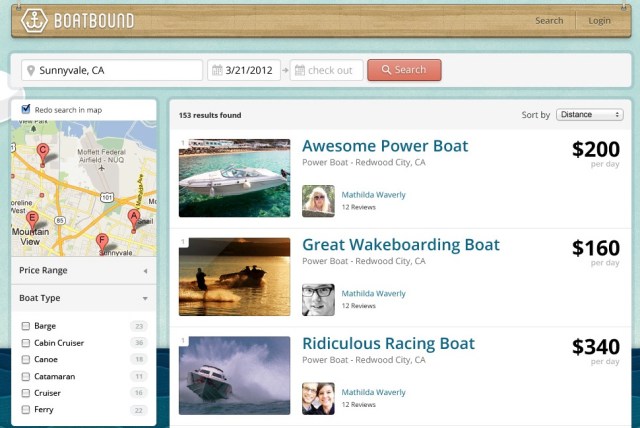 Boatbound plans to launch later this year, but you can request an early invite here. Here’s how it works. There are about 13 million registered boats in the U.S., and 95 percent of the time they’re unused. Boatbound offers a marketplace website where boat owners list their vessels for rent. Anyone from novices to experienced captains can browse boats and book one for a day. You can search by ship type and location, sort results by price and other factors, see descriptions of the boats, read reviews of the owner or message them, and book through a calendar widget.

Boatbound keeps a percentage of the rental price, which helps pay for the $1 million in Lloyd’s liability insurance every boat comes with. This way both parties don’t have to be terrified of a scrape or even serious crash. If something unfortunate happens, you can call a 24-hour claims hotline just like with a car, a claims adjuster comes out, and the boat gets fixed as quickly as possible. Hall explains, “That’s the linchpin, making the boat owners feel comfortable.”

To make sure you’re capable of steering the ship, renters have to go through an identification check and outline their boating history. The less experienced are pushed to state-approved study guides. Completing an on-site course earns renters a badge on their profiles or even credit to spend. 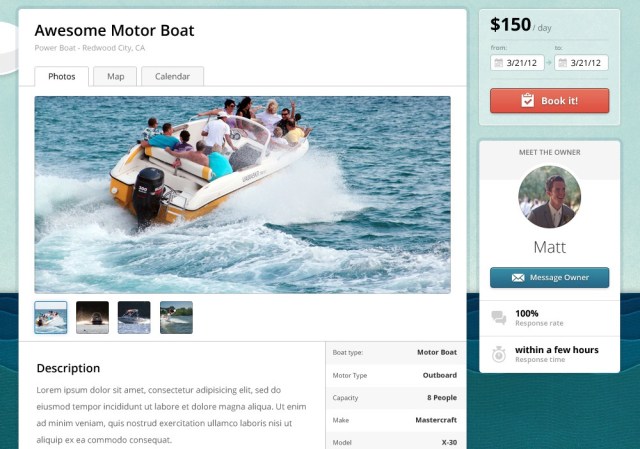 When you meet up with the owner, who Hall calls “the last line of defense,” they’ll vet you to make sure you’re ready, and it’s ultimately their decision whether to hand over the keys. Once you’re good to go, the owner gives you a brief tour of the boat to note where the lifejackets are and any tricks or other critical info. If necessary, Hall says, “there’s an option for renters to charge an extra $50 or $100 to do a quick on-boat training, so the owner can show you exactly how to drive it.”

“Our focus is to keep this as safe as possible,” Hall stresses. Luckily, common sense usually disuades people from booking boats that are out of their league, the same way you wouldn’t rent a stick-shift Porsche you didn’t know how to drive on “carBnB” service Getaround. “We have a code of conduct,” Hall tells me, that includes a two-way review system to make sure boats come back clean, gassed up and unharmed. Accidents happen, but “if we find out a renter is out there terrorizing the water, we have no problem suspending them.”

Hall hopes to open the waters to a whole new class of boaters. “People either think it’s too expensive or they don’t know how to boat, but we want to lower the barriers and get it on the short list of things to do on the weekend. Right now it’s a rich white man’s sport. We want to make boating kind of non-elite…by tapping a younger, more diverse demographic.”

Boatbound is trying to forge an “Ahoy Culture” in part by taking hints from Lyft’s pink mustaches and fist-bumps. “When you rent, everyone gets caps with the Boatbound logo. It’s about saying ‘Ahoy!’ and waving, telling the story of the boat and how it was named.”

By making it fun and accessible, Hall believes people will come back to rent again and again. If owners can form relationships and get two or three people steadily renting their boat once a month, they could completely offset the cost.

A few companies, including Fun2Rent and Incrediblue, have already dipped their toes in the space, and since Boatbound joined AngelList last month, Hall says clones are already popping up. What sets Boatbound apart, though, is what Hall calls a “first-of-its-kind product with Lloyd’s.” He implies boats listed elsewhere wouldn’t be as well-protected.

Typically a boat owner’s insurance is void if they take money for a rental. “We had to put together a program that would act as the primary insurer of boats.” Hall mentioned it took the rise of Airbnb and some pushing by some high-influence individuals (maybe some of its investors), to get Lloyd’s to agree to the plan. While different boats and renters would cost more or less to insure, at least at first Boatbound is just absorbing the fees.

Convincing boaters to put their ‘babies’ in a stranger’s hands could be a tough sell. Some just won’t think its worth the money to have to worry about their ship, which could cause shortages on the supply side. Boatbound will have to do everything in its possible to avoid an Airbnb-esque disaster with a sunk boat and injured passengers.

There are 75 million boaters in the U.S. each year. I think there’s about to be a whole lot more. Since I spoke with Hall, whenever I’d mention the company to people, their eyes would light up. They either wanted to invest, or set sail immediately.

Renting a car or a place to sleep is standard. Renting a private jet is just too pricey. But Boatbound brings giddy decadence to the average joe through collaborate consumption. Something so fun shouldn’t be reserved as a status symbol for the wealthy. You deserve a day on the water, surrounded by friends with the sea spray in your face, and Boatbound is going to give it to you.

Boatbound plans to launch later this year, but you can request an early invite now.