It was just last week that BlackJet — the so-called “Uber for private jets” — threw a big launch event and announced plans to add San Francisco and Las Vegas as destinations. But BlackJet is no longer alone: There’s a new entrant in that market, called Arrow, which seeks to speed up the time it takes to travel, by offering affordable private jet service between Seattle and the Bay Area.

The big idea behind private air travel is providing a more seamless experience to travelers, who can save tons of time by skipping all of the inefficiencies of commercial air travel — check-in, security, boarding, and deplaning. For business commuters, that can save a ton of time — typically an hour or more — at each end of the trip. Passengers can hop on a jet minutes before takeoff, and can drive out of the airport very shortly after landing. Because these services use small planes and private airfields and runways, they’re also not subject to the typical vagaries of commercial travel, such as overbooked planes or flight delays caused by unexpected conditions at the airport.

Arrow is launching with a $500 membership fee which will allow an organization to designate up to five travelers who can book flights. Its expects that its flights will also be cheaper that BlackJet’s planned service, running $499 each way between Seattle and airports in the Bay Area.

Members will be able to book travel online, via mobile apps, or by phone. They’ll also be able to reserve rental cars to be dropped off at the FBO or have a car reserved to pick them up, all of which is designed to reduce the amount of time and hassle passengers have to face while traveling.

I got a chance to try out the private jet service in a test flight for press, investors, and possible early members. (Disclosure: Arrow chartered the ride as a demonstration of what the service would be like.) The trip originated at Oakland’s Landmark Aviation, a fixed-base operator (FBO) with its own entrance and runway. There were no security hassle for passengers, who typically arrived minutes before takeoff. There were also no delays or waiting for passengers to unload once we reached our destination.

As for the trip itself, the ride was incredibly smooth. Unlike commercial airlines, there were no FAA rules against using electronic devices at any point in the flight — indeed, there were even outlets for passengers to charge their various iPhones and laptops available throughout. While it wasn’t working on the trial run, Arrow plans to have complimentary WiFi for its passengers throughout the flight. And it expects to offer free iPads and headphones to customers during their trips in the future.

Arrow hopes to compete against more traditional private, charter, and fractional jet companies, by offering the same type of experience at a fraction of the cost. And it will also go up against new startups like Los Angeles-based Surf Air or San Francisco-based BlackJet in offering more accessible private air travel.

Like BlackJet, Arrow plans to launch with a membership model that will allow companies and individuals the ability to book flights on private jets. But compared to Arrow’s $500 membership, BlackJet will cost $2,500 for each individual who wants to use the service. 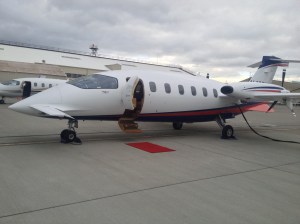 BlackJet is working with third-party private charter companies to create more efficient use of planes and crews that would otherwise just end up sitting around dormant, much in the way that Uber partnered with black car and limo services to make use of their drivers when not occupied. In contrast, Arrow plans to own its fleet of private jets. In particular, Arrow plans to finance a Piaggio Aero Avanti II, a kind of hybrid prop plane with propellers mounted behind its twin engines.

The plane, which retails for about $7 million, is ultra-efficient and fast. It has a range of about 800 miles, according to Arrow founder and CEO Russell Belden, and will seat up to nine passengers in the seating configuration that the startup intends to employ once it orders one. Given its range, efficiency, and cost, the Avanti II is seen as the perfect prop plane for the private jet service.

Before Arrow launches, however, it hopes to have 200 members committed to trying out the service. Once it’s reached that number, the company will place its order for the first of its prop planes. It expects to have that plane about three months later, at which point it will officially launch, hopefully sometime in the summer.

While Arrow will own its planes, the service will actually be operated by Seattle-based Kenmore scheduled charter airline Kenmore Air. Initial flight routes will include round trips between Seattle and Oakland or Seattle and San Jose twice a day. But the company plans to expand its service based on demand, adding more planes as is necessary. It also hopes to offer other routes as it expands, like a trip between San Francisco and Los Angeles that will run about $299 each way. Future routes could include New York City to Chicago, or Chicago to Washington, D.C., according to Belden.

The target market is business travelers for whom time equals money. Rather than wasting an extra couple of hours navigating the hurdles of commercial air travel, they’ll be able to show up later and leave earlier, giving them more time to get shit done. Because it will have direct communication with members, it also hopes to be able to improve the service based on their feedback — for instance, determining the best flight times for its users.

With companies like Arrow and BlackJet popping up, the private jet market will no longer seem so private or unattainable. For those who value their time more than the money it costs to use these services, they could finally offer a compelling alternative to commercial air travel.