A Singaporean fashion retail site has secured $1.6 million (S$2 million) in funding from a government-backed group of VCs.

When it launches next month, the e-tailer, called Inverted Edge, will carry a consignment of goods from 36 Asia-Pacific designers, according to CEO, Debra Langley.

The funding it received was from the Singapore National Research Foundation (NRF), Incuvest, Accel-X and four other undisclosed private investors. Incuvest is a government-appointed VC under its Technology Incubation Scheme (TIS), which offers 85 percent of a decided sum from the NRF if Incuvest comes up with the remaining 15 percent.

The online fashion scene is seeing a surge in retail startups mushrooming against a backdrop of larger global players like Asos.com. In Asia, the market is further split with massive marketplaces like Taobao’s Tmall and Rakuten. Langley said that Inverted Edge doesn’t plan to compete with the likes of Asos, but hopes to differentiate by focusing on shoppers outside of Asia keen to buy from designers in the region.

She said that Inverted Edge will stick to a more high-fashion branding, and has secured some exclusive designs that it will bring on launch day. The company has a new warehouse space in the country’s Lavender district, and is in the process of stocking it. The company has a staff of 10 in Singapore.

Inverted Edge sounds like the obvious offspring of Langley’s career: Prior to this, she was the Asia-Pacific president for Brussels-headquartered freight forwarder Borderlinx, and before, the president of DKNY Jeans’ international operations.

Here’s a preview of what to expect, ahead of its launch in March. 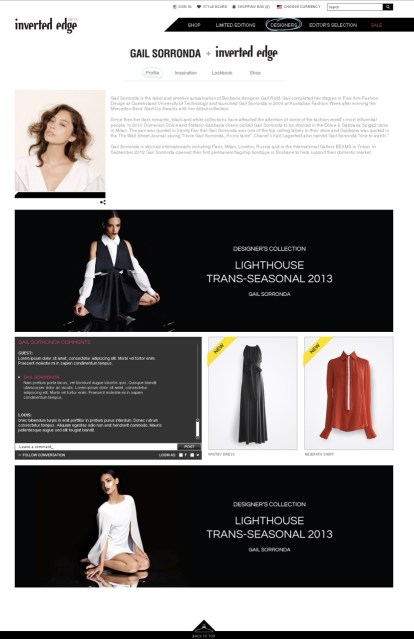