I find statistics absolutely delicious. Pew research released fresh stats on what slice of Americans are addicted to all of the various social networks as of December 2012. There are a few big business and cultural implications.

Pinterest has practically caught up with Twitter, with 15 percent and 16 percent of adult U.S. Internet users on each network, respectively. Pinterest, which launched in 2009, has experienced explosive growth, especially with a white, female and affluent user base. Women are five times more likely to use Pinterest (5 percent vs. 25 percent) and almost twice as likely to be white and college-educated. It’s become a magnet for hip urbanites searching for the hottest wedding gowns and apartment decor. Twitter, however, gets a lot more attention, since neither presidential campaigns nor Middle Eastern activists are leveraging style catalogs to rearrange their countries’ political leadership.

There is no longer a minority gap in social media use. The surveyed groups (whites, Hispanics, and African-Americans) hover around 68 percent of total adults. Almost twice as many African-Americans (26 percent) use Twitter as whites (14 percent). The disproportionate African-American use of Twitter has fascinated culture commentators and scholars. One study found that African-Americans in celebrity news strongly predicted their Twitter use. Former web editor of the The Onion, Baratunde Thurston, hypothesized that “there’s a long oral dissing tradition in black communities,” explaining, “Twitter works very naturally with that call-and-response tradition — it’s so short, so economical, and you get an instant signal validating the quality of your contribution.”

Ironically, not using social media may be an elite thing. Those with a college degree are slightly less likely than those with some college to use social networks (69 percent vs. 65 percent). While the difference isn’t statistically significant, at least one study verified the trend among educated users to ditch Facebook for moral, political or cultural reasons. “Many Facebook refusers actually revel in their difference from the mainstream, seeing it as a mark of distinction, superior taste, and identification with an elite social stratum,” said New York University Professor Laura Portwood-Stacer.

Hipsters find it too mainstream and others find their privacy policies troublesome. In other words, not using social media is likely a product of more education, not a lack of access. 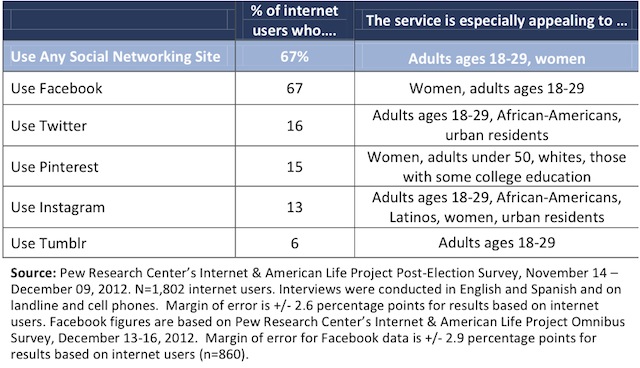