Social monitoring startup DataSift is releasing an open source, embeddable version of its Query Builder today, allowing anyone to customize and embed the company’s tool for conducting social media searches.

Founder and CTO Nick Halstead told me that DataSift’s “key differentiator” is its focus on “getting the right answer,” rather than just overwhelming its customers with data. The Query Builder is an important part of that, allowing customers to create highly specific searches using a visual interface, with no coding required. (The company says it monitors “billions of public social conversations on Twitter, leading social networks and millions of other sources,” and that it provides access to both historical and real-time data.)

And by open sourcing this tool, Halstead said DataSift is allowing any developer to include its social data in their own application. That could be particularly significant in the world of business intelligence and analytics, he said, because social data is often “siloed” away from other important business data.

“We believe that the monitoring market is actually quite a small subset of the BI and analytics market,” Halstead said. “We think social data should be a first class citizen in that ecosystem.” 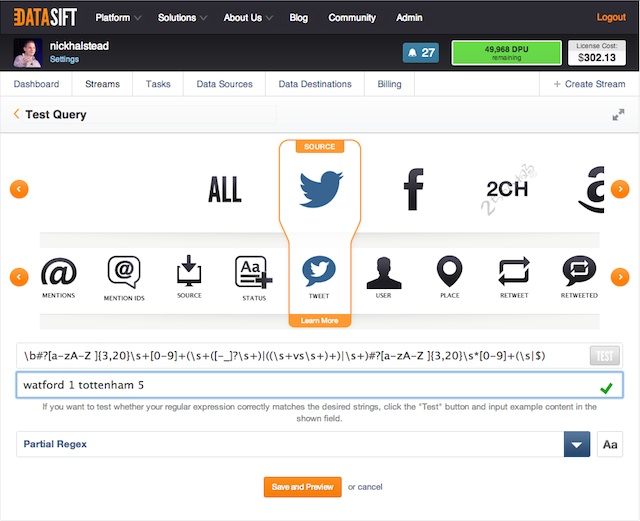 This also makes the Query Builder entirely customizable, so developers can add or remove any features, and also alter the appearance as they like. Data from queries can be pushed to other data warehouses and applications. And yes, you can use it on a smartphone or tablet.

At the same time, Halstead said the answers will be delivered in the company’s custom language, CSDL. So even as different versions of Query Builder get embedded in all kinds of apps, you’ll still need a DataSift subscription to use them.

Sample modifications from DataSift include a Query Builder with pre-loaded queries, another where the filters are limited to a couple of data sources, and a third with altered animation.

“Developers will be able to extend [Query Builder] for themselves and extend it for the community,” Halstead said. “I imagine there are going to be forked versions that go off in completely different tangents from what we can do.”

Developers can read more about the project here.