BlackJet, which we’ve described as the “Uber for private jets,” has announced San Francisco and Las Vegas as two new destinations. The company was founded by Garrett Camp, the co-founder of Uber, so it’s no surprise that the young company is already ramping up its coverage areas.

What makes BlackJet so interesting is that the company has come up with a model to make private jets available to people at business-class prices. If you’re flying from say, San Francisco to Los Angeles, why would you want to mess around with an airline when you could take a nice comfy private jet there? Much like Uber’s black cars, the company hopes that the answer is obvious to you.

If you’re in San Francisco, you can attend the launch event for the new destinations along with us in Union Square, and BlackJet will be giving $2,500 memberships to its service to 1,000 lucky guests. You’ll be able to use the free membership, which comes with a complimentary companion seat, within one year to any of BlackJet’s destination. Currently, BlackJet has flights between New York and Los Angeles and New York to South Florida. Along with San Francisco and Las Vegas, the company plans to add Chicago, Washington, D.C., Boston, Dallas, and Seattle as destinations in the near future. 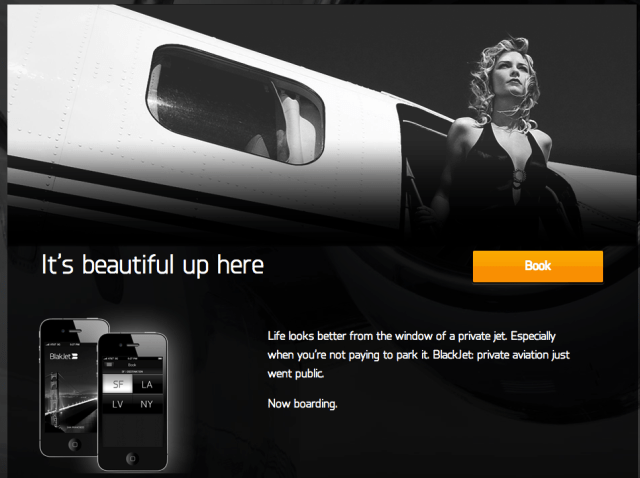 As with Uber, the plans are to add these new routes based on popular demand from its members.

Here’s what BlackJet CEO Dean Rotchin had to say about today’s news:

In the spirit of making reliable private jet service affordable for millions more travelers, we thought it was just right to demonstrate our powerful new business model by awarding enthusiastic San Francisco travelers who attend our launch event with memberships and companion seats. Simply put, BlackJet is unique in our ability to deliver on this promise.

In a way, this service makes complete sense, because if you don’t have to pay to park and gas up your own plane, the crowdsourced cost to do so is manageable. This is one of those lofty and disruptive ventures that is a hallmark of Silicon Valley and the culture of doing something better than those who have done it for years.

Here’s what you get with one of the fancy memberships:

Oh, and you get to fly on this:

Status quo sucks, so why not hop in a private jet?