This won’t come as a surprise, but the publishing industry is in trouble. Digital technologies have transformed the publishing landscape — just as they did for music — from the way companies distribute content to how we consume it, and our reading habits are fundamentally changing as a result. Book publishers and traditional booksellers are struggling to stay afloat amidst the rising digital tide, and many have been unable to make the transition. Borders was the first big casualty in 2011 and the decline has accelerated since. Barnes and Noble recently announced that it plans to close 20 stores a year over the next decade, and bookstores as a whole closed at a rate of two per day in 2012.

While traditional publishers and bookstores decline, digital publishing and eBooks are, of course, on the rise. eBooks accounted for 22 percent of all book spending in the second quarter of 2012, up 11 percent from the same period in 2011. No one is happier about this transition than Amazon, which became the single largest channel for book purchases in 2012 and saw its market share increase to 27 percent in the second quarter of last year.

As Amazon has increased its domination digital publishing, it has been able to exercise greater control over the price at which publishers sell their content, which, in turn, helps it to sell more Kindles (and gain market share). Naturally, this has frightened the wits out of publishers, who are now scrambling to find an alternative way to build, market and distribute their digital content without being subjected to the Amazon Squeeze.

Inkling wants to change that, and it’s now taking dead aim at Amazon. With the rise and maturation of the Web and digital distribution channels, today anyone can create and publish their own book or magazine (or song or album) and share it with the world. Together, Apple and Amazon have helped accelerate the self-publishing revolution, as iBooks and CreateSpace and Kindle Direct (respectively) have given amateur authors a fast, easy way to publish their own content and distribute it on enormous digital storefronts.

Inkling first announced Habitat in February of last year as a direct response to Apple’s recently-launched iBooks 2. While iBooks makes it easy for teachers and amateur authors to publish their own textbooks optimized for the iPad, Inkling’s new platform targets the other end of the spectrum: Professional publishers an industrial solution.

While Amazon has the Kindle and Apple has the iPad, the big publishing companies don’t have their own digital stores or devices, nor do they have the tools that would allow them to easily digitize their enormous libraries. Since February, Inkling has been hard at work at not only offering professional publishers a way to make their content interactive, but to provide a better way to distribute and discover that content.

Today, Inkling is officially unveiling a new and improved Habitat, which has developed into a true end-to-end solution for professional publishers. The free, collaborative digital publishing environment now allows publishers to coordinate and communicate in realtime from first edit to final publish in the cloud. The platform allows publishers to create interactive content experiences, integrated multimedia, images, audio and video into both existing and digital-first books and publish to multiple platforms with one click, automatically formatting that content for any screen size.

But the real key to Habitat is its integration of Inkling’s new “Content Discovery Platform,” which essentially allows publishers to turn Google into a storefront for their books. The platform enables books to be indexed by search engines like Google and to be seen by users when searching for relevant keywords. This means that every section inside and Inkling book has its own URL that can be indexed by search engines, or shared individually so that readers can more easily discover, share and buy the book directly while searching. After a certain numbers of views per book, readers are prompted to purchase either a chapter, or the entire book.

This could be a boon for publishers, which have been suffering declining revenues from models that haven’t been optimized for digital distribution, as it allows them publish chapters and books in Inkling’s own store, publish single-title apps in the App Store, or export standards-compliant EPUB content to third-party distributors.

At this point, publishers will try anything that can help them get a beat on Amazon and have been continuously forging partnerships with startups working in this space. But Inkling’s growing list of publishing partners is beginning to eclipse the rest.

As part of its announcement today, Inkling revealed that Pearson has committed to integrate Habitat into its existing infrastructure and vendor network, and, in turn, four new publishers will be bringing their books to the platform, including DK Publishing, HarperCollins, Lonely Planet and Rick Steves. These new additions join Inkling’s two dozen existing publishing partners, like McGraw-Hill, Elsevier and Wiley, Frommer’s, For Dummies, Kaplan and O’Reilly — to name a few. 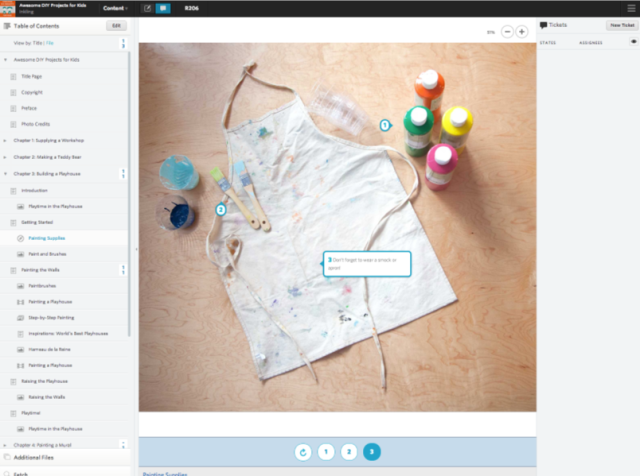 When Inkling first appeared two and a half years ago, it was primarily focused on the textbook market, allowing publishers to create well-designed, interactive textbooks for the iPad. But over the last year, the startup has expanded beyond education to include more consumer-focused titles. Last year, with the release of its new “Library,” Inkling created an online store that would allow it to feature curated digital eBooks across a range of genres, beginning with hobby and interest-specific learning materials.

At the time, Inkling founder and CEO Matt MacInnis told us that the storefront was designed to be “Amazon for illustrated learning content.” By featuring over 400 titles in categories like Food & Drink, Travel & Leisure, Arts & Photography and Music, the startup wanted it to stand as a demonstration to indie and professional publishers of “what’s now possible in the digital textbook market.”

And with its new Google-friendly indexing features, Inkling now provides publishers with a way to not only (in theory) increase their traffic and revenue, but catch potential customers before they pop over to Amazon to search for books. According to DBW, by this fall, Inkling wants to have millions of its cards indexed by Google, and it intends to share that search data (along with reader and conversion data) with publishers — something that most distributors have unwilling to do up to this point. If successful, that could have a real impact on Amazon and, in turn, compound the incentive for publishers to get on board.

This comes at a time when companies that were formerly giants in the textbook rental and sales space, like Chegg, have been moving away from textbooks to diversify and become service providers. Chegg’s transition, in particular, couldn’t have come at a better time as Inkling’s new end-to-end platform makes its textbook business potentially even more vulnerable.

In turn, there is an emerging set of companies focused on leveraging open educational resources as a way for teachers, companies and consumers to get access to up-to-date, quality learning content without having to turn to traditional publishers (and their textbooks). Startups like Boundless have made significant headway in this regard (and drawn ire from the big publishers), but Inkling’s new platform now gives professional publishers access to this content on top of their own licensed materials. Habitat supports Creative Commons licenses as well, which enables users to publish open content, including open educational resources, and distribute it with a single click — for free.

The platform also represents a potential threat to startups like Kno, which just yesterday announced “Advance,” a new platform that allows publishers and authors to turn their content (PDFs and flat files, etc.) and assessments into interactive digital eBooks for free.

Kno has partnered with over 80 publishers itself, has released 200K titles and offers an array of learning tools baked into its growing platform, so it has a head start. In the end, Kno is looking to offer an advanced tool to publishers, allowing them to scale the digitalization of their content, instantly update books to users and add interactive elements to their content on the fly. Thanks to Kno and Inkling, publishers now have more options when it comes to facing the digital revolution and putting some pressure on Amazon and Apple, but how much the two can thrive in the space amicably remains to be seen.

In an address last night, MacInnis equated Amazon to an evil master who everyone in the industry is beholden to whether they like it or not, so first and foremost, Inkling’s goal is to relieve some of that pressure by giving professional publishers a real, enterprise-grade digital publishing solution. And that, in and of itself, has huge potential.