Fresh on the heels of its partnership with UK educational app maker Mindshapes, San Francisco-based kids’ app platform Fingerprint is today rolling out a new version of its software which introduces kid-safe multiplayer gaming, messaging and more. This news was hinted at in January, when CEO Nancy McIntyre, formerly of LeapFrog, spoke of a forthcoming release which would introduce new features based on twelve months of in-house research on how kids and parents use Fingerprint’s technology.

The company, for those unfamiliar, now has nearly two dozen kids’ games using its software platform, including those built in-house and third-party applications which have integrated its SDK. Originally, the majority of Fingerprint’s apps were self-produced, but this is the year that begins to change – going forward, around two-thirds of Fingerprint apps will be either third party creations, or those co-created in partnership with another company. In 2013, the company plans to launch 40 more titles using its platform technology. 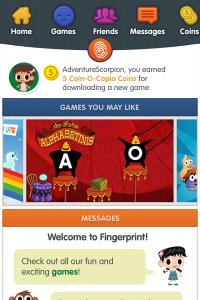 Fingerprint has also recently gained licensing rights to some big-name brands in kids’ franchises, including morality-focused VeggieTales, Franklin & Friends (now on Nick Jr.), Calliou (which airs on PBS Kids’ brand Sprout), and more. In an ever-crowded app store, the benefit of building a branded platform like Fingerprint is doing, is the potential for in-app recommendations and cross-promotions. The company already does this to some extent, and has plans to expand on those capabilities in the future. For that reason, having recognizable kid brands in rotation, it can keep its some 400,000+ active “families” (not users) heading back to back to the App Store for more from Fingerprint, as opposed to just launching the App Store app in search of something new. 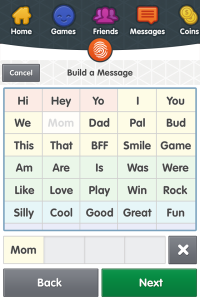 Players can now either choose “play as kid” or “play as family” – the former which makes it easier for multiple kids to share a device, create their own learning milestones, and earn their own achievements, and the latter which helps parents and kids share devices.

Other titles released this quarter include “Minusclue: The Private Life of Insects,” based on the TV series of the same name, and “Kids Learn Manadrin,” the first of many language-learning titles from Digital Learning Company.

Fingerprint says the rest of its catalog will be upgraded to use the new platform and social features this spring.

As of January, Fingerprint users had logged over 55 million minutes of gameplay to date, and were gaming for sessions that averaged 8 to 10 minutes. Fingerprint is backed by $9+ million in funding, led by interactive media and entertainment company Corus Entertainment.