The year was 2004. I had just graduated college and my old Gateway mini tower PC was on its last legs. I was about to move out to California to begin my life. My parents asked what I wanted as a present before I left. But they already knew the answer. Dude, I was getting a Dell.

I went online and customized the hell out of an Inspiron 8600. The price tag was well over $3,000. The thing was a beast. If computers came with hemi engines, this would have had one. When the fans kicked on it sounded like a space shuttle launch. It was thick enough to stop a bullet. It just about as portable as a Microsoft Surface — the original kind. It had a retina-searing red cover. I was in heaven.

My god, how times change.

Incidentally, that era was probably the peak of Dell’s power. At the time, it was the No. 1 PC-maker in the world with over 16 percent market share. The company had even withstood the merger of HP and Compaq in 2002 — its two largest rivals at the time — to come back to the top of the PC heap. The “Dude, you’re getting a Dell” advertising campaign had just ended a very successful three-year run. Dell’s market cap was right around $100 billion. Founder Michael Dell felt comfortable enough to hand the company over to someone else.

Then everything started to fall apart.

I’ve been thinking a lot about Dell’s fall from grace this week, following the news that Dell officially has a deal in place to take itself private. Yes, humorously, it’s Dell and not Apple that will be giving the money back to the shareholders. (A statement which is totally not relevant, by the way, or so says Dell PR.)

But Dell is not shutting down. Instead, the company will try to transform itself behind the curtains. The boring (and likely) guess is that over the next few years, Dell will fully become a software and services company — almost exactly following the IBM transformation of yesteryear. But the Microsoft involvement in the buyout suggests that Dell could still be eyeing a personal computing future.

But how did Dell get to this point? You’d think they simply got complacent given their dominance of the PC industry. That’s undoubtedly part of it mixed with a nice dash of mismanagement. But Dell was trying to match rivals coming at them from other sides. I fondly recall my Dell Axim, a Palm Pilot competitor from the PDA era of handheld computing. And there was the Dell DJ, the iPod competitor, which people probably have less fond memories of.

The bigger issue, of course, is that the entire PC market has been collapsing. But rivals such as Lenovo (which facilitated the IBM transformation by buying its PC business) and even HP have fared better. If trends hold, Dell could fall to fourth — or possibly fifth — in the worldwide PC market share race this year, behind Acer and maybe even Asus.

In the U.S. it’s entirely possible that Dell will fall to third place behind Apple. Yes, “not relevant” Apple (see: above).

In an interview with Bloomberg, the “Dell Dude” himself, actor Ben Curtis, was forced to admit something that must be embarrassing for the company. When asked if he was using a Dell at the time the commercials were running, Curtis responded: “Absolutely.” The logical follow up: “Are you using one now?” His response: “I have a… desktop. I am using a Mac right now.”

Curtis, probably realizing what that must sound like (and clearly hoping Dell will eventually bring him back), tried to backtrack a bit, saying the MacBook he uses was a gift. But then he pushed forward with something that’s fairly obvious to everyone. About his Apple machine: “It’s something that has also been sort of one of the necessities now. Which is what I think Dell is competing with. Trying to get back to the younger generations which have been inundated by Apple.”

You visit college campuses these days and you see this. More importantly, you visit the homes of people with young children and it’s iPads galore. Does anyone really believe these kids are going to grow up to buy Dell computers? Does anyone believe any of these kids will actually know what Dell computers are? Does any kid today remember what a Gateway 2000 machine was? And those guys had cow boxes.

All of this sort of makes me sad when I think back to my Dell, which was, incidentally, also the last Windows PC I ever bought. It could, without question, beat the shit out of my current MacBook. But that’s only in the brute-force sense — like a heavyweight boxer beating up a flyweight.

Let’s go with that analogy for a second. Dell as the heavyweight boxer works because much like the world in which we now live, heavyweight boxing no longer matters. In fact, boxing as a whole really doesn’t matter anymore either — increasingly like the PC industry. Tablets and smartphones are various types of the new sport that does matter: MMA.

Dell was the last great heavyweight champ. (With HP potentially ruining its legacy by continuing to slog it out in a pathetic way, well past its prime.) And heavyweight champs don’t fare well as MMA stars. 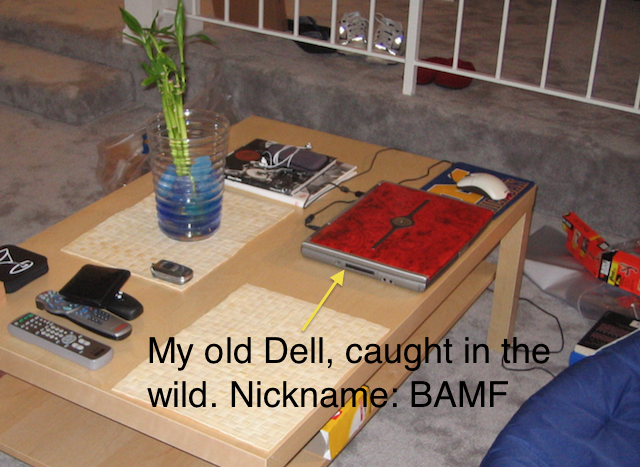