One of the problems I’ve always run into as a reporter covering the app ecosystem, is that it’s so hard to find actual data about how well apps are doing. There are the top free and grossing ranks, but those tend to measure downloads or volume of in-app purchases. They aren’t good at displaying retention, or whether apps actually keep the users they attract.

Then for non-gaming apps, the top grossing ranks are basically irrelevant because these apps tend to be pre-revenue, or earn money through advertising or other transactions that aren’t processed by Apple or Google.

But now, a Sequoia-backed company called Onavo is launching Onavo Insights, which uses data to show real market share and active usage for apps. This product will compete against companies like AppAnnie, which shows live app rankings pulled from the Google Play and iOS charts.

Onavo pulls its data from two consumer-facing products that help consumers manage their mobile data consumption. Those apps Onavo Extend and Onavo Count track and compress the flow of data in and out of third-party apps, so that people can save on their monthly mobile phone bills. Because Onavo sees live data out of these apps, they can infer which ones are being used or not every day.

From that, they decided to create a monthly data service. They pull aggregated, anonymized data on app use from their consumer-facing products to profile how well other third-party apps are doing.

“As we were distributing our own apps, we became acutely aware of the lack of actionable mobile intelligence to help companies understand how users are utilizing their smartphones in the mobile ecosystem,” said Guy Rosen, Onavo’s CEO. “Recognizing this gaping hole, we set out to create the most comprehensive market intelligence service in the mobile industry.”

In Onavo Insights, you can look up apps and see how much marketshare they have in the U.S. (or what percentage of U.S. iPhone users actually use the app every month).

Below, for example, you can see Snapchat’s rise and that it grew from being actively used on a single-digit percentage of phones last fall to more than 10 percent this past January.

Or in this chart, you can see that while Path is actively used on between 1 and 2 percent of iPhone in the U.S., it has high user engagement. 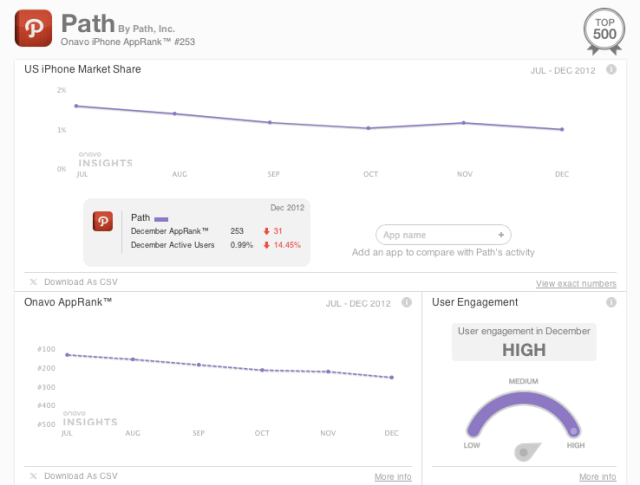 Or you can see that Rage of Bahamut, that trading-card game that has hovered among the top 30 or so grossing apps for the last six months, is actually only used by between 0.5 to 1 percent of U.S. iPhone owners. (Yes, that tiny sliver of users is that lucrative. Hence, why Zynga launched its own trading card game in the West.)

Onavo bases its data on a sample set of a few million users of its Onavo Extend and Count products. It does have blind spots. It’s not great for apps with very little usage, since those will hardly show up at all in their data.

As for the company itself, it plans on continuing to offer mobile data compression products, so Onavo will function like a two-pronged business going forward.

“As a company we started out creating mobile utility apps for consumers, and this remains our core DNA,” Rosen said. “The foundation of our company is first and foremost to build innovative apps that solve real problems for consumers and offer the best experience possible.”

Insights is free, but there is a premium version called “Competitive Insights” that lets developers compare how well their app is doing against rivals on usage, engagement and retention. There are two other premium products called “Ad Insights” and “Audience Insights” that help developers increase their conversion rates on ads inside their apps.

Onavo declined to share the monthly subscription cost for the service, saying that potential clients should reach out directly to their sales staff.