Hall, an AngelPad-backed business communications app which is taking on the likes of Yammer, Jive and Salesforce.com’s Chatter, is out now with new native applications for iOS and Mac. The company is also announcing some decent traction, with over 10,000 businesses signed up for the recently revamped service.

This startup is interested in building what comes next after the “social intranet.” CEO Brett Hellman explains. 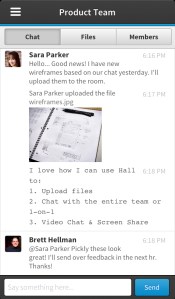 “Now we’re moving into this real-time communications phase, that’s the next wave,” says Hellman, who began work on Hall after finding a need for improved internal communication at his old job back at Intuit. He notes that people aren’t working 9 to 5 any more, we’re working on our mobile devices, many companies have distributed teams, and some companies don’t even have traditional offices at all.

At Intuit, Hellman was the only person on his team at the Mountain View office, which led to the original inspiration that later became today’s Hall. “That’s where I learned we needed a better way to communicate,” he says. But he also realized that there’s a need to extend that communication outside of company, too. “No one has really built a real-time network that works cross-company,” he points out. “They’re all pretty much silos that sit inside the company firewall.” Hall is different, merging the Yammer use case with the broader functionality of something like IM or Skype, perhaps.

Hellman left Intuit in 2010 to found Hall, raised a $580,000 seed round in fall 2011 from Founder’s Collective, PivotNorth and others. After adding in additional funds from 500 Startups, Sand Hill Angels and existing investors in June, the company has grown its seed funding to $975,000. The current product was in September. Originally, Hall had focused more on real-time decision making, but that use case didn’t gain traction, leading to a pivot this fall.

“It failed because it didn’t create habits,” Hellman admits of the original version. “People would show up and they’d love it, but it wasn’t something you needed to do every day, so retention was horrible. But we learned from that,” he says. “That’s why we moved to communications.”

And so far, so good, it seems. The app’s ability to reach users outside the corporate network is contributing to its viral, double-digit growth over these past four months, Hellman claims. Today, Hall’s 50,000 end users, some of whom work at Fortune 500 companies, are spending over three hours per day in the product. Company retention is now also in the double digits after several months. And Hall grew by 50 percent in January. Early numbers, but not bad ones. 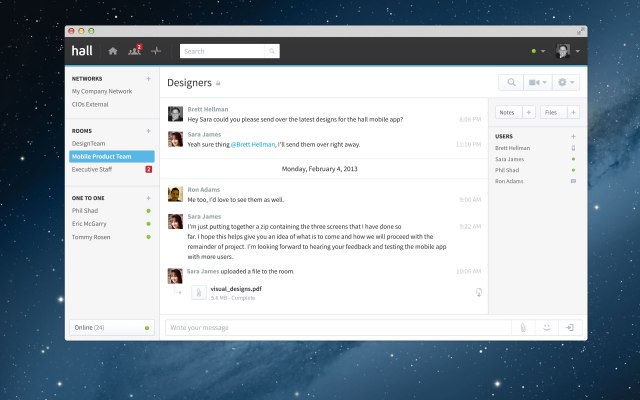 On Mac, the new app’s best new feature is the technology it’s been built with – it used to run in Adobe AIR, and now it’s a native app. Meanwhile, both it and the iOS apps have been redesigned with a new look and feel – something which the company plans to continue to improve in the future as well. In the months ahead, Hall’s apps will continue to be polished, the bugs squashed, the speed boosted, and the company will improve the one-on-one messaging feature. On this latter item, the improvement will mean adding in video chat and file sharing, similar to what’s already supported in the group chat interface.

Hall isn’t ready to talk revenue numbers yet, though it does have a strategy for that in place – paying users have the ability to assign an administrator who can manage the company’s end users and permissions. But for now, the focus is on growth, retention and engagement, says Hellman.

The updated Hall apps can be download from the company homepage here.