WishPop, an iPad application designed to help children, parents, and other family members better manage gift lists and thank you notes, is launching today on the Apple App Store. The app sends kids into a world where they can browse through a kid-friendly catalog of toys and games, add items to their wish list, share messages with contacts their parents approve of, and play educational games in order to earn “wish points” which can then be translated into real-world rewards.

Although a significant portion of the money spent on gift giving ($100 billion in the U.S. alone) is in buying gifts for kids, there aren’t that many ways for parent and child to collaborate on the wish list process today. In many cases – including within our own household here – the solution is for the parent to set up an Amazon wish list for their child and then share that list with others. And while that’s a functional and convenient enough solution, it also keeps the child out of the loop. WishPop changes that.

The app offers both a parent and kid login, allowing the former the ability to input and track birthday reminders for their kids and others they want to buy for, while the latter gets a safer way to browse for gifts than they would on Amazon or the broader web. 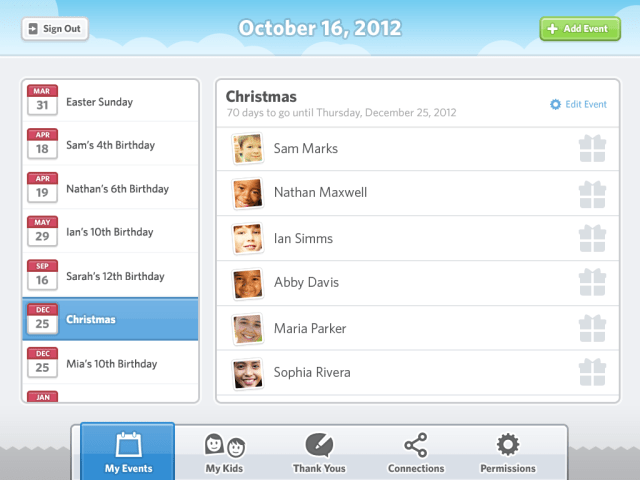 WishPop is well-designed, too, which speaks to the caliber of those who worked on this app. The startup’s full-time team includes previous iOS game designers from Ramps, folks from Slide and Acclaim Entertainment, Donna Friedman Meir, a top exec at National Geographic Kids, WB Kids and Nickelodeon; Steve Thomas, an ex-Head of Creative at Nickelodeon; and others who have worked with Disney, Ren & Stimpy, and Yo Gabba Gabba!

Kids get to create their own customizable avatar for their WishPop login, and then are transported into WishTown’s highly visual, modern toy catalog. Here, they can tap on things that interest them and “wish” for it, and they can use the included search feature to seek out the items they already know they want. The app supports not only toys, but also categories like electronics, books, e-books, clothes, jewelry, apps, subscriptions, extracurricular activities (e.g. “summer camp”), and even charitable donations. 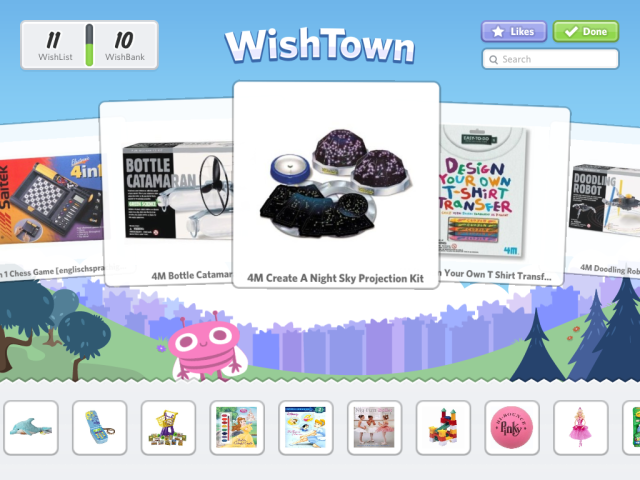 In another, still developing, section of the WishPop app, kids can play educational games and read stories, earning wish points along the way, which can later be exchanged for the items on their lists. Parents, of course, are in control of what point levels kids have to hit for that to happen.

I personally appreciate the idea of translating these types of activities into rewards since I’m the kind of parent who will likely end up paying for “A’s” or associating allowance with household chores, for example. Not all parents think the same way, however, but they can just choose not to use the feature. I’d also like to see this feature expanded in the future to support more types of points-earning activities. That’s something the company has heard from other parents, too, according to founder Robert Ross, a former Apple engineer and former biz dev guy who previously worked at five other VC-backed startups before building WishPop.

Ross, a single dad of a 10-year-old girl, says he got the idea for the app due to his own struggles in keeping up with his daughter’s interests. “While I know [my daughter] very well, I’ve often been challenged knowing what she’ll like,” Ross tells me. “I’ve often been surprised how her tastes change, sometimes slowly and other times rapidly. Last year, I learned Cameron really wanted robot science kits and she wanted make a donation to the SPCA where she went to camp last summer. Even though we talk constantly, I only found all this out when she made a wishlist for the holidays,” he says.

I think all parents – and grandparents, aunts, uncles, cousins, family friends, etc. – can relate to this struggle. It’s even harder to buy for others’ boys when you have girls (or vice versa), or when you’re far away from family and not sure what the kids are into or what they already own. It’s also hard when you’re young, single and busy, trying to pick out a gift for a nephew or niece, and feeling a bit overwhelmed by the selection at your local big box toy store.

However, as much as I appreciate the gifting side of the application, the best part to WishPop may be the “thank you” feature. In a section that mimics the iPad drawing apps kids are already familiar with, they can design their own cards and send them out to family and friends after receiving their gift. Kids can draw, write, add photos or video from the iPad’s Camera Roll or Photostream, and they can even record their own voice greeting. Currently, the cards only reach other WishPop members, but the company is adding much-needed email support shortly. Recipients can also share their cards to Facebook – yep, this is going on grandma’s Timeline. 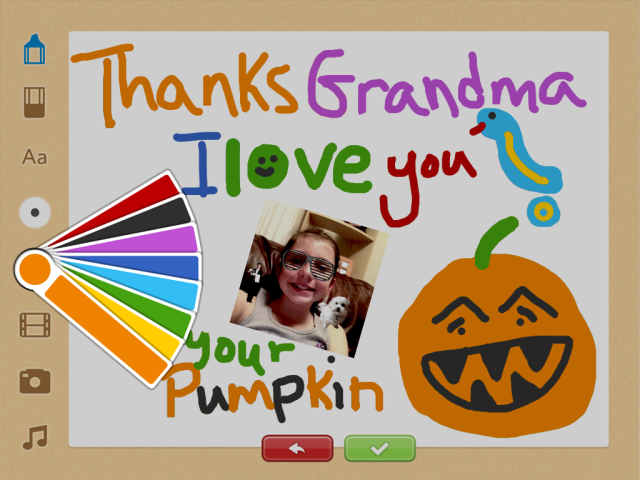 This is a great feature to have in an age where hand-writing cards and purchasing stamps seems passé, but the idea that children should learn to express gratitude through thoughtful expression remains.

Currently, the app works on an affiliate model, pulling in Amazon’s one-click checkout right into the parents’ interface for easy of buying, but the plan is to begin hosting the transactions in the app itself later this year.

Based in San Francisco, WishPop is an eight-person team and is backed by $580,000 in “friends and family” funding as it goes to launch. The app is a free download here in iTunes.