Question: when does your mobile app also need a web experience? Answer: when the app is essentially an e-commerce shop. Sesame, the recently launched mobile gifting app from Sincerely, a company known for its mobile photo postcard and greeting card applications, is now web-friendly with the debut of the Sesame online store. Like its app-based counterpart, the web store will allow users to browse through the various gift boxes for sale, including the trio of new additions for Valentine’s Day, then purchase and send them without the need to install an app on their phone.

This is a slight change in direction for Sincerely, which has been a mobile-first company in the past. Although the Sincerely website does offer users access to their past orders, account info and address book, the process of designing cards, greetings or ordering other gifts was done on mobile, previously.

Sesame, for those unfamiliar, launched just before the holidays, allowing users to browse and send themed gift boxes from their iPhone. These boxes include unique, hand-picked items packaged nicely, and centered around a theme like “Cocktail Hour,” “Game Night,” “Puppy Picks,” and more.

According to Sincerely CEO Matt Brezina, the new web store was added based on users’ feedback – they would read about what Sesame had to offer, but were frustrated that they had to download an app to even see the available gift sets, he says. Now they have access to a fully featured shopping experience right on web.

Not only is running an online store like this a change for the company, Sesame itself represents a step up from the apps Sincerely launched in the past – postcards and greetings you send from your iPhone. But so far, that transition has gone well, says Brezina. Though he declined to provide user numbers because of the app’s newness, he did note that Sesame’s holiday sales quickly passed those of its Postagram app (mobile postcards) in terms of daily revenue, thanks to the average order size being so high, as well as increased interest from the corporate gifting market. 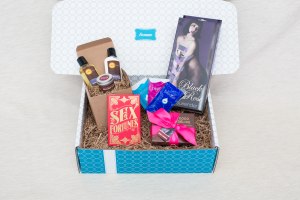 “This has been our strategy all along,” says Brezina of the shift to Sesame’s more expensive gifting options. “We start users on the world’s simplest gift, a printed postcard, and then cross-sell other, more premium priced cards and gifts.” Once someone uses the Sesame app for a gift, their rate of repeat purchase is high, Brezina adds.

Because Valentine’s Day is just around the corner, the company has introduced three new gift sets ranging from a spicy “5 Shades of Grey” set complete with massage oil and lotions, chocolates, silk ties and more. The other two sets are tamer, featuring the traditional V-Day selection of chocolates, a card, and a plush toy (a “love monkey,” aww).

Since its launch, the company has added just one other set to the dozen or so it already had, and still plans to add around two per month going forward, including holiday gifts.

Although Facebook has also been making moves into social gifting in recent days – including with yesterday’s launch of reusable gift cards – Sesame’s gifts, in my personal experience, have been of higher quality than the early, more self-promotional efforts Facebook has delivered. Gifts was a low mark on Facebook’s otherwise solid Q4 2012 earnings this week, as Gifts product and promoted user posts functionality accounted for less than $5 million of Facebook’s overall revenue.