Update 6: Here’s the final official word on the issue from Twitter:

We experienced intermittent issues affecting web and mobile users, globally, between approximately 7:00am and 9:50am PST. This incident has now been resolved. We apologize to users who were affected by this, and we’re working to ensure that similar issues do not occur.

Update 5: Twitter appears to be mostly back to normal now. We’ll let you know if the company shares anything more about the cause of today’s outage.

Update 4: Service looks to be down once again, and we’ve received official word from Twitter that they’re still working on the problem, and that their status blog is the best place to watch for updates.

Update 3: Service seems to be mostly restored on our end. Let us know if it’s back for you, too.

Update 2: While service appears to be still flickering in and out with bursts of tweets, the outage has been more or less going strong for around an hour now. Still no additional details from Twitter on the cause.

Update: Twitter has now updated its service status page to acknowledge the issue, saying “some users may be experiencing issues accessing Twitter,” and noting that its engineers are working to resolve the problem.

Twitter is currently experiencing a widespread service outage that appears to be intermittent, according to our checks with the web client, third-party apps and website service status checking tools. Other TC staff are able to access the service on and off every few minutes, but it seems like the stream is interrupted, and third-party clients like Tweetbot still appear to be having trouble connecting at all, although they’re still able to send and receive direct messages.

There’s nothing yet on Twitter’s own service status page, but the generally dependable DownForEveryoneOrJustMe seems to think that it’s having problems, as does downrightnow.com. Based on our information, it looks like the outages began appearing around 20 minutes or so ago, and are affecting users globally. The fail whale is coming up when we try to visit Twitter.com, with a message saying the service is “over capacity.” The fail whale is showing up around the world, as this screen from german reader Stefanie Kreiselmeyer proves: 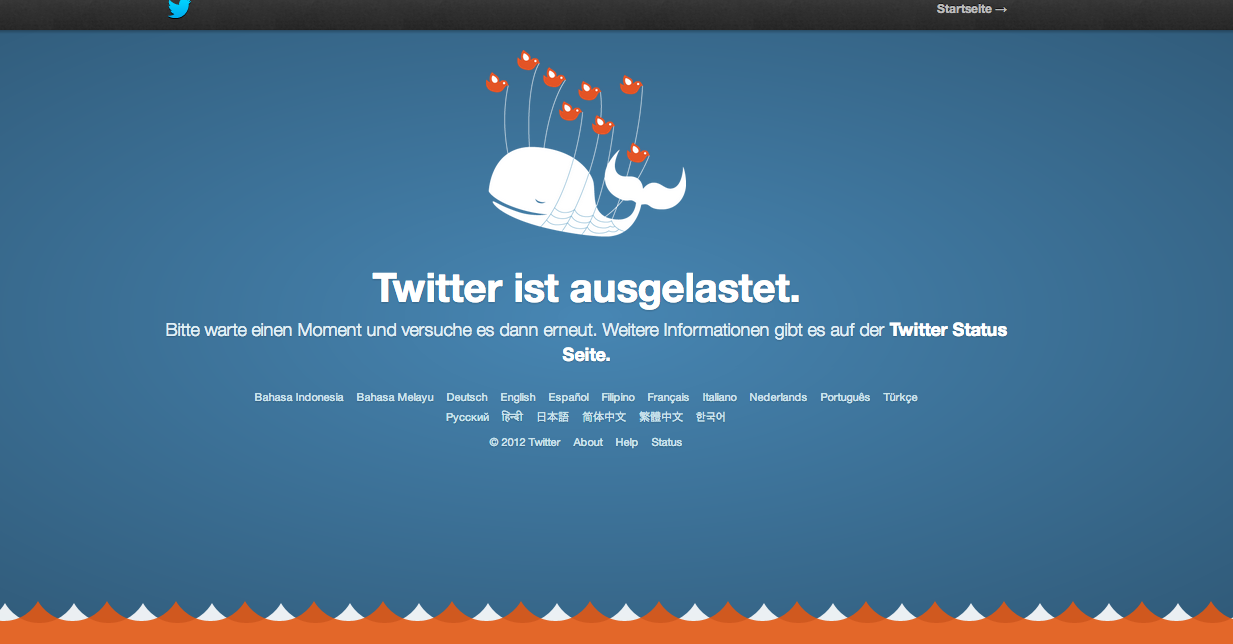 The last major Twitter outage that affected a large part of the service’s global user base occurred on June 21, 2012, when the service was down for around an hour and forty minutes, owing to what Twitter called a “cascading bug.” It experienced a partial outage last July for UK users thanks to the London Olympics, and some smaller outages earlier this month.

We’ve reached out to Twitter to find out more about what’s going on, and will update with more info when it becomes available. For now, let us know if you’re seeing a break in service, and on what type of client.