At the end of 2010, Vinay Bhargava decided to leave Google — not a decision he made lightly after spending seven-plus years in Mountain View and Washington D.C. But the decision became clear after talking to a group of students at the Thomas Jefferson High School for Science and Technology in Virginia. The students helped him realize that, in spite of the fact that nearly 26 percent of students hire an independent counselor to help with the college search, the resources for college-bound high school students are few and far between — especially ones that cater to those who are the first in their family to go to college.

So Bhargava teamed up with Sean Burke, a counselor at Thomas Jefferson High School, to co-found Mytonomy, an alumni-powered college counseling service that aims to help high school students prepare for college and get exposure to the issues and culture at their institutions of choice. Launched in the fall of 2011, Mytonomy has grown into a peer-to-peer social network that brings alumni guidance to students while supporting overworked counselors.

The startup targets students between the ages of 14 to 25, helping to guide them through their biggest life choices, like how to pay for college, what to study, where to apply and how to turn their studies into a viable career. Leveraging the growing popularity of video in education, Mytonomy offers its service through a video Q&A format, in which advisors respond to pre-determined questions from students, while those advice seekers use Mytonomy as their own personalized research platform.

The service is free to use for individual students, college groups, educators and working professionals, while schools can access premium features, including analytics and a private video network by licensing the startup’s software at a price of $5/student per year. Today, Mytonomy is being used by students at over 100 high schools, and thousands of students have checked in to use its free crowdsourced college counseling.

To support the early growth, the startup has raised $250K from NewSchools Venture Fund, Kapor Capital and a handful of angel investors, part of which the team used to roll out a new UI this winter to improve the site’s user experience. When asked about his firm’s investment in Mytonomy, Mitch Kapor told us that video can be a powerful and effective tool, especially when well-assembled and curated, and that students are able to get far more value out of the college and have a better chance of succeeding and graduating when they’re better prepared for what to expect. 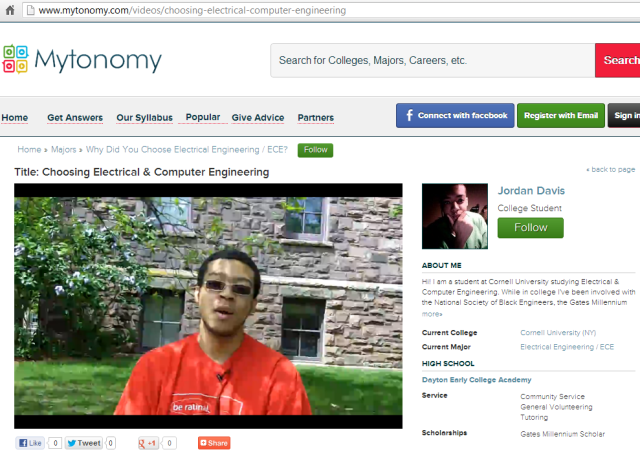 “Students from more affluent families get this from older siblings and in general have better access to what college is like,” he says, but first-generation college-goers and underprivileged students just don’t have the same access to these resources, which is where Mytonomy comes in. Last year, acceptance rates hit record lows at four of the eight Ivy League schools, which goes to show how competitive it’s become to get entrance to the top universities in the U.S. As a result, students and parents are now coughing up thousands to get access to the best tutors and counselors to help give them (and their progeny) a fighting chance.

Meanwhile, students who don’t hail from the “1 percent” are left behind, with money becoming the golden key to higher education these days. Tuition rates may decrease eventually thanks to the rise of quality web-based programs, but until then, students need a different option. Bhargava said that part of the solution is leveraging the collective pool of knowledge and experience of alumni groups.

The problem, of course, is that getting in contact with alumni in one’s peer group, for coffee or whatever the case may be, isn’t easy. Cold calling or emailing alumni in your school’s database often ends up being akin to yelling into a well. So giving alumni one resource where they can respond to pre-determined questions from students to share their experiences and help students understand best practices for constructing majors and finding a job post-college definitely has a place, and some appeal. 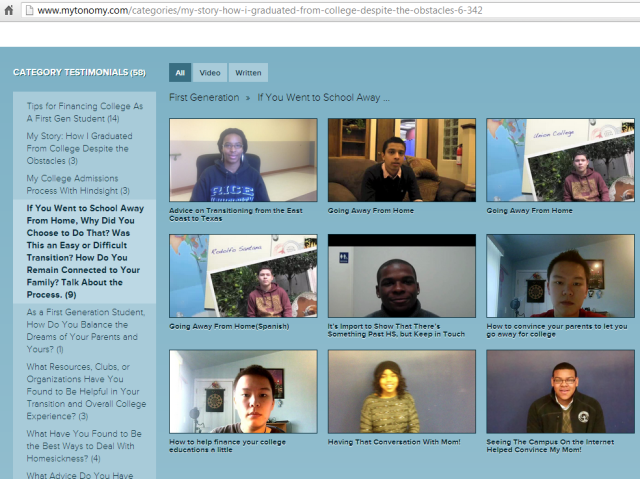 One potential issue, though, is that Mytonomy doesn’t compensate its guidance counselors, relying instead on good will and the reward of being a mentor to someone going through the same nail-biting experiences you went through at some point. There are plenty of those willing to contribute their time to talk to students, however, and Bhargava said that the team is considering implementing some kind of incentive structure for contributors.

In the meantime, Tiffany Parry Director of Alumni Relations and Events at The Lab School Of Washington — a K-12 day school for students with disabilities in D.C. — highlights another incentive for alumni. The Lab School has used Mytonomy Plus (the startup’s premium, school-facing version) to create its own private “channel” for its students, so that they can home in on content from alumni of their school in particular, while the school itself has a level of oversight in terms of the content being uploaded.

In terms of general user experience, the best way to find advice for college-bound high school students doesn’t come from a YouTube search, although that tends to be one of the first things students do when searching for educational advice on the Internet. What’s more, schools want some level of oversight when it comes to crowdsourced video content and generally don’t want students searching for advice on YouTube — or don’t allow access to the site — for a variety of reasons.

But Parry says that services like Mytonomy work in the school’s context because they can offer a guidance-focused video channel without having to hire 10 additional guidance counselors. Plus, as anyone who’s interacted with video chat, Skype video or video advertising knows, personal testimonials can be a lot more engaging and effective than the alternative.

Mytonomy is operating under a similar mission as JobScout, as both are looking to make it easier for the millions of Americans without access to top guidance counselors, tutors and recruiters to level the playing field. There’s value in having someone who comes from a similar background as you, went to the same school, and looks and talks like you sharing their experience. Mytonomy is also busy moving into new languages, too, starting with Spanish.

There’s still the issue of quality control — naturally, not all of Mytonomy’s contributors are certified counselors or mentors — but right now the bar is set pretty low, and anything that can help students make better, more informed decisions has an opportunity to move the needle. 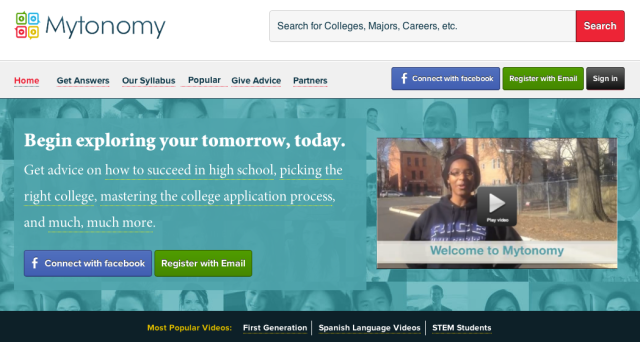