Munich, Germany-based online fashion community moodboard startup, Stylight, has secured a “significant” multi-million euro Series B investment from SevenVentures, the venture subsidiary of media company ProSiebenSat.1. The exact amount has not been disclosed but Stylight co-founder Benjamin Günther told TechCrunch it is a “significant seven-digit number”.

Günther said Stylight will use the new funding to “heavily invest” in the product, including building and launching an iOS app in Q2 (and an Android app later this year) — adding that Stylight is already seeing 15 per cent of its traffic coming from iOS. “We want to market to the community but also add new features to the product, and especially mobile — that will be the big topic for this year,” he said. “We want to invest in product, community and mobile across all countries this year.”

ProSiebenSat.1 operates 29 TV stations across 10 European countries, with a reach of more than 62 million households according to its website — and this reach will also be benefiting Stylight. Günther said ProSieben will promoting the site through extensive media coverage. “It’s a cash investment plus on top we get the opportunity to do advertisements across their network, so there’s also a media package on top,” he said.

Stylight operates in eight European markets at present — with local websites for Austria, Germany, the Netherlands, Switzerland, France, Italy, Sweden and the U.K. The fashion discovery site lets users create style moodboards (as seen below) by uploading their own outfit photos, adding songs, videos and — crucially, from the business point of view — incorporating for-sale products alongside the outfits to bring in the ecommerce element. 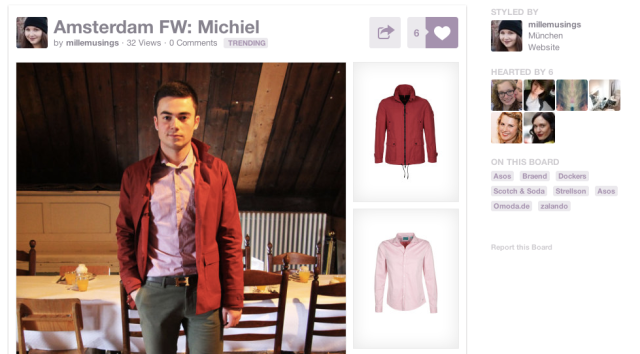 Stylight partners with local fashion retailers in the different markets, such as Fashionesta and Rocket Internet-backed Zalando — with more than 150 retailers currently signed up and providing products that site users can incorporate into their moodboards. Stylight says it has more than 500,000 clothes and accessories items available to buy via click through to the retailer’s website.

External sales generated via this affiliate-style click through model amounted to around €100 million in 2012, according to the startup, with more than a million orders taken in the year. Meanwhile, it says visitor numbers to Stylight are growing, with around three million visits per month to its websites in December.

The startup describes its special sauce as the ability to offer fashion-conscious users the chance to get inspired by foreign styles and fashions but buy from a “trusted, local online store”. Stylight is looking to continue to ramp up the number of retailers it partners with. “We will add a lot of local shops in the next coming months,” said Günther.

Stylight has previously secured seed funding from Holtzbrinck Ventures, and a Series A round in 2010 from Holtzbrinck and Tengelmann Ventures. Its total funding to-date runs to seven-digits, according to Günther.

PRO SIEBEN INVESTS MILLIONS IN FASHION COMMUNITY STYLIGHT
Munich, 31st January 2013. The ProSiebenSat.1 subsidiary Seven Ventures is set to invest in STYLIGHT. The Munich-based start-up will therefore not only profit from extensive media coverage but also from a capital investment of millions of euros. Benjamin Günther, cofounder and CEO of STYLIGHT says: “ProSieben is our absolute dream investor. The media company has shown that it has an excellent understanding of online businesses and believes they are the future. We view ProSieben’s commitment as an impressive affirmation of our
business strategy.”

On STYLIGHT.co.uk, users have the possibility to create their own mood boards with their own outfit photos, favourite songs, videos and items from a selection of over 500.000 products available on the site. Users can share their mood boards with others in the community as well gain inspiration from other users- whether they live in Milan, London, Paris or Stockholm. STYLIGHT took more than a million orders in 2012, making them one of the first fashion communities to have a revenue model that works internationally. Founded in 2008, STYLIGHT has greatly expanded in the past year and is now active in eight European countries. External sales amounted to around 100 million euros.
Benjamin Günther: “ProSieben’s investment shows us that Social Curation is now a high priority for German media corporations. It’s all about international inspiration and local commerce; be inspired by an international community but buy from a trusted, local online store. This is what makes STYLIGHT so unique. And while we’ve still got a long way to go, our fast-growing community shows us we’re on the right track. Our main goal is to become the leading Fashion Community.”