Live concert notification and recommendation app Bandsintown just released a Spotify app to make it easier to query its concert database. Whenever you are listening to something interesting on Spotify, just drag the track on Bandsintown’s icon in order to get upcoming tour dates.

In addition to this clever integration, the new app taps into everything that has made Bandsintown a widely used service. When you first open the app, you have to log in using Facebook. Then, your Facebook likes are imported into Bandsintown’s notification system, giving you a customized and local music agenda.

Like other Spotify apps, playing tracks from suggested bands is just a click away. You can create a playlist with music from bands playing in your city to find out what you should be looking for in the coming weeks.

Other traditional features found in other Bandsintown apps are in this new app as well. You can track new artists with one click, say that you are attending a concert on Facebook right from the app or buy tickets.

Bandsintown’s Facebook app has been a turning point for the New York-based company. Using music likes has made the initial setup easier. It allows the company to send a weekly email, recapping upcoming shows and suggesting new bands based on what you already like. Thanks to push notifications, mobile apps present another way to alert users about new tour dates.

Bandsintown’s data is very thorough. Many artists are now using Bandsintown to manage tour dates and promotion. The service automatically posts on a band’s Facebook page. It eases the process for up-and-coming artists who don’t have a dedicated tour manager and who don’t know when they should advertise their concerts.

Competitor Songkick already has a Spotify app. For the end user, choosing one over the other will be a matter of personal taste. Many users have already been using a concert tracking app before Spotify, they may keep using the same app.

Yet, having a Spotify app will showcase Bandsintown’s features to many new users. It allows the company to integrate with Spotify’s data, making the experience a lot more interactive than on other platforms. Combined with Spotify’s upcoming discovery features, there will be no excuse for learning about a concert after it’s already over. 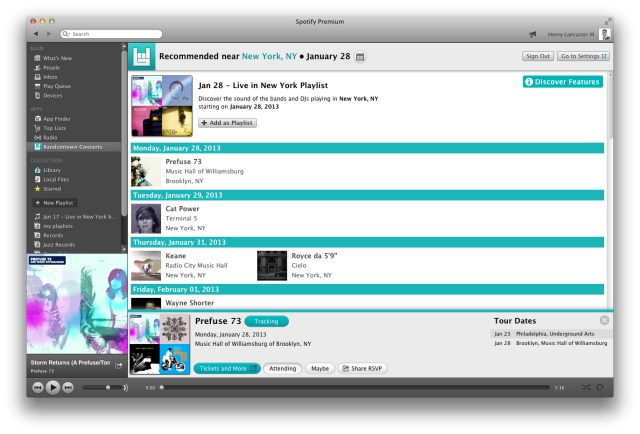