E-sports streaming provider Twitch is getting a huge validation of its platform from one of the biggest video game franchises out there. Today the company is announcing that gamers playing Call Of Duty: Black Ops 2 will soon be able to instantly stream their game sessions online with a single click.

Twitch has been working to get its streaming video service embedded into popular games by releasing an SDK that they can use to build its streaming service into their games. By doing so, developers can enable their users to quickly and easily connect to the Twitch video platform. The ability to stream Call Of Duty: Black Ops 2 comes as game developer Activision worked with Twitch to use its SDK and make the streaming service automatically available. The implementation is the first major console game to integrate with the Twitch platform, enabling instant broadcasting without any complicated setup.

Call of Duty: Black Ops 2 is already one of the most popular games being streamed on Twitch, according to Twitch VP of Marketing Matt DiPietro. But that’s due entirely to passionate gamers rigging up their PCs to broadcast streams on their own. The new implementation will make it easier than ever for users to let others tune into gameplay. 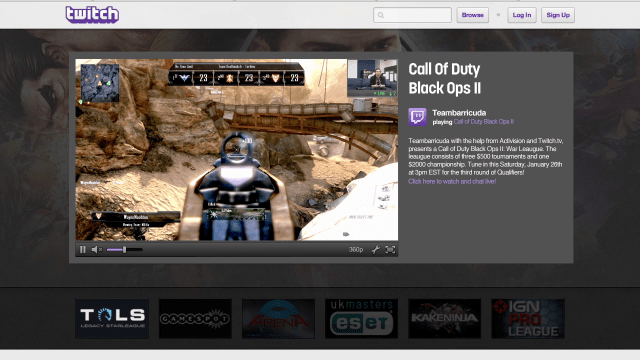 Users need only enter their Twitch account in the game menu to begin streaming to the startup’s website and viewing apps. They can also share their streams through various social networks like Twitter and Facebook, allowing friends to easily tune into their game sessions. In addition to streaming gameplay, viewers will be able to check out additional information about broadcasters, including class loadouts (whatever that is), recent match data, and career stats across all supported Call of Duty games on Call of Duty Elite.

At launch, the broadcasting capability will be available to Xbox gamers, but Twitch expects the feature to soon become available on PS3 and desktop versions of the game as well. In addition to game video, users will be able to hook up headsets and video cameras to capture their audio commentary or video reactions as they stream single or multiplayer sessions on Twitch.

Last September, Twitch raised $15 million from Bessemer Venture Partners to capture the large — and growing e-sports streaming segment. The company, which was born out of Justin.tv, now has more than 23 million unique viewers per month, and is growing about 10-15 percent per month. The platform has more than 300,000 unique broadcasters, and more than 3,000 official partners. Viewers watched 6 billion minutes viewed in December, with the average session time topping 1.5 hours.