Kim Dotcom’s Mega file hosting service puts an emphasis on privacy, which makes it impossible for Google and others to index the files its users store on the service. Even Mega itself doesn’t really know what’s on its servers, but that isn’t stopping some intrepid developers from trying to build services on top of Mega. Mega-Search.me, for example, is a new search engine for the service, but because it can’t just index the files on Mega’s servers, it’s a crowdsourced service that allows anyone to add links to their own files on Mega.

It’s not clear who is behind this project, but it looks like it has been online for just under a week. Judging by the ads on the service and its Facebook page, the developers are likely from France. 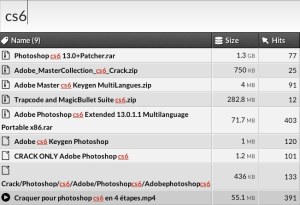 What is clear, however, is that Mega-Search works pretty well. Just search for a file, click on it and you are immediately taken to Mega, where you can either download the file or import it to your own file locker on the service. Users can anonymously vote links up or down, but the feature set is pretty limited otherwise.

The obvious use case for this service – and one that Kim Dotcom and his team may have some ambivalent feelings about – is to distribute pirated software, music and movies. There’s an “infringement” button on the site, but that just takes you to Mega’s own copyright notice.

We’ll have to wait and see for how long this site will stay online. The fact that people are sharing these files and are downloading them from Mega, however, makes it hard for the Mega team to argue that they don’t know what their users are using the service for.