WalletKit, a 500 Startups-backed platform allowing businesses to create passes for mobile wallets like Apple Passbook, is today making its public debut just ahead of 500 Startups’ Demo Day. Although pass-building toolkits are now a fairly crowded space, WalletKit offers a couple of differentiated features – anyone can update the passes created on its platform with new promotions, offers and other changes, and it’s also planning to target all top wallet platforms eventually, not just Apple’s.

For many companies, Apple Passbook may represent their first foray into mobile – offering a mobile app may have not made sense before (such as for consumer packaged goods companies). For others, Passbook instead represents a way to get a more prominent position on users’ homescreens, by offering users more timely access to coupons, incentives, and other offers. And of course, Passbook, as its name implies, works to deliver tickets and other passes to users as well, like movie tickets, bus or plane tickets, and more.

This opportunity has attracted a number of players to the space, including but not limited to, Passdock, PassSource, PassK.it, Passhop, and PassWallet, for example, not to mention the recently acquired PassTools (Tello), which is now available at its new home, Urban Airship. 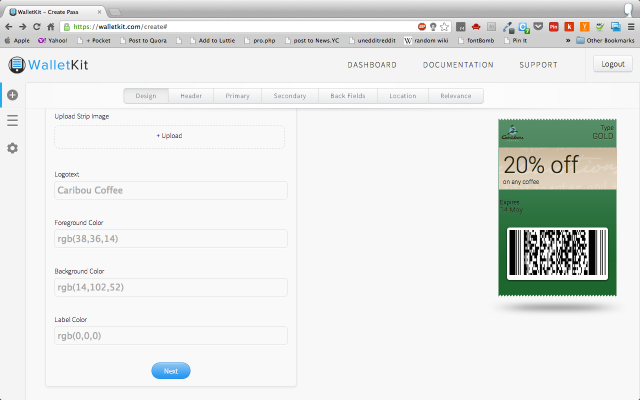 WalletKit, like several others, offers both APIs for developers as well as a visual, DIY pass-building tools for its users. But what makes it more unique is its back-end. Through an online dashboard, businesses can track users’ engagement with passes, run reports, and most importantly, update their passes in real-time with just a few clicks.

“For example,” explains WalletKit co-founder Kevin William David, who created the company with CTO Ramakanth Dorai, “let’s say you have a boarding pass and you’re waiting for your flight at Gate #154. And let’s say the flight attendant at the counter needs to change the gate from #154 to #155. She can’t call the developer back at the office,” he says. “But if the company uses our tools, anyone without technical knowledge…can push an update to all the passengers using our platform.”

Passbook itself already offers update functionality, to be clear, WalletKit just wants to make that technology accessible to the layperson through an easy-to-use online interface. 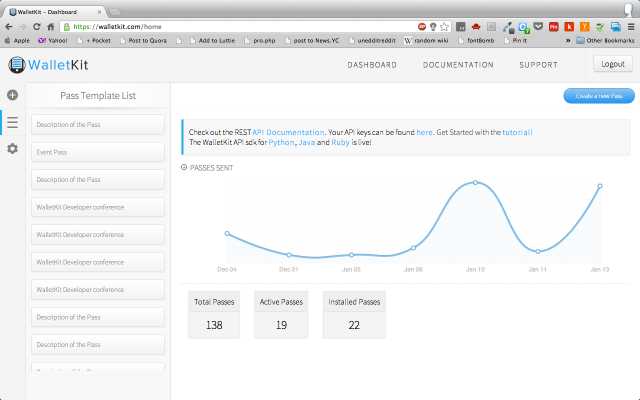 Another difference between WalletKit and some of the other competitors, is that the company’s vision entails cross-platform support, including plans for Google Wallet and Windows Phone wallet platforms, when those further open up.

The company co-founders, who are based in India, also have an interesting story to share about how they got into the 500 Startups accelerator. They…well…they kind of stalked one of the investors, Paul Singh, during his trip the country, Kevin tells me. Kevin says that they initially had an email exchange with Singh, but when he didn’t respond to meeting requests, the founders tracked him down at his hotel, after seeing his geo-tagged tweet with a photo attached, taken from his hotel’s window. 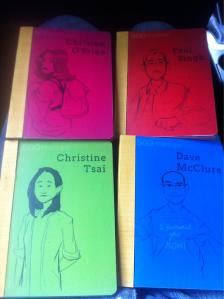 Knowing that they had to do something to stand out, they happened to catch him checking out at the front desk, and handed him these customized pitch books about their company. Given he had never met the two – and the book was decorated with a cartoon of Singh himself – the initial exchange was not pleasant. “He got freaked out,” Kevin admits. “He kind of threw the book back at us, and said, ‘who the **** are you guys and what do you want?’,” Kevin says.

Undeterred, Kevin and Ramakanth started pitching him right there in the lobby, and eventually ended up sharing his cab to the airport to give their complete presentation. Three weeks later, the company got a letter telling them they got in 500 Startups.

So, yeah, stalking actually works sometimes – but only if your product is good enough, of course.

Currently, WalletKit’s toolset is priced based on the number of passes a business needs. Enterprise plans are also available. The company is also working to roll out more tools that would allow companies to run campaigns on Passbook in the future.

Based in Chennai, India, WalletKit’s only seed funding right now comes from 500 Startups, but Kevin says they have investor commitments for a future raise.