The battle for international users continues to heat up for streaming music services. Just this morning, Deezer announced expansions into developing markets in the Middle East, Africa, Asia and Brazil, and now Rdio follows with news of its own – it’s going free. The company says it’s rolling out free web access internationally to all territories where it operates, except for Germany and Brazil.

The list of supported countries includes the U.S., U.K., Australia, Belgium, Canada, Denmark, Estonia, Finland, France, Netherlands, New Zealand, Norway, Portugal, Spain and Sweden. (Germany and Brazil are still in copyright and label discussions with Rdio, the company says). It’s a good-sized lineup, but one that’s a bit smaller than the seventeen regions where Spotify works, and quite a bit smaller than the now 182 countries where Deezer is supported. But unlike Deezer, which historically offers free trials followed by paid tiers for web, or web plus mobile, access, Rdio will now use free web streaming as a lure to attract new users. The streaming music it offers as a part of this new initiative will also be ad-free, which it hopes will help hook users on the experience.

This new deal is essentially the exact same offer which Rdio announced back in October 2011 for its U.S. users. As before, the company isn’t really providing unlimited streaming, but instead offers limited free streaming for up to six months, slowly pushing its users into premium tiers based on their activity, and how many songs they stream during the month.

In the past, Rdio placed a green bar at the top of its site, showing its free users how much music they had access to for the given month. It will now do the same with this international promotion launching today. Going forward, only paying subscribers ($4.99 USD/month) have unlimited access to streaming music, while others will be guided by the green bar. And as always, those who want to use Rdio on mobile (including offline) will have to pay to upgrade. That’s a competitively priced $9.99 USD/month. 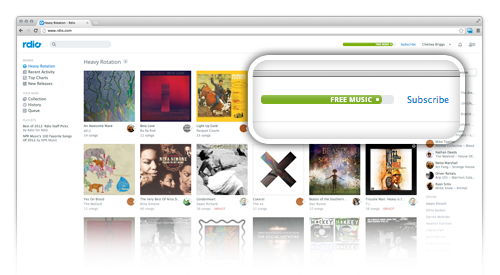 The free access is available on both Rdio’s web app and its desktop applications for Mac and PC. Currently, the site offers over 18 million songs to choose from – also a bit smaller than the 20 million tracks offered by Spotify and Deezer, for comparison’s sake.

The company declined to provide actual user numbers, which should now be seen as a red flag. Users/subscribers is a critical metric for determining growth, and both Spotify and Deezer are more forthcoming here with 20+ million and 26 million, respectively, according to their most recent public disclosures. Based on AppData’s monthly active figures, Rdio still has far to go, with only 100,000+ monthly active users, compared with Deezer’s 1 million+ and Spotify’s 10 million+, to give you an idea of where these services stand. Unless Rdio has a large number of non-Facebook users/sharers, it’s losing the battle in terms of on-demand music right now.

Or, in other words, it’s not just offering a free tier to boost its international audience in a land grab – it actually needs to ramp up its overall user base significantly, and fast, in order to stay competitive.