All is not lost, however. Vine users can flag inappropriate video using the mobile app and, if flagged enough times, the system adds an interstitial roadblock that warns you of inappropriate content. Twitter has similar blocks in place for NSFW content and even accounts, but these features aren’t yet available on Vine.

The company has long affirmed that the site is censorship-free except in cases of illegality. In fact, country-specific systems are in place on Twitter to ensure content illegal in Germany, say, is unavailable in that country but available elsewhere. 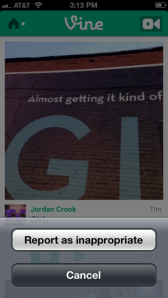 UPDATE: A Twitter spokesperson has issued the following statement to us:

Users can report videos as inappropriate within the product if they believe the content to be sensitive or inappropriate (e.g. nudity, violence, or medical procedures). Videos that have been reported as inappropriate have a warning message that a viewer must click through before viewing the video.

Uploaded videos that are reported and determined to violate our guidelines will be removed from the site, and the User account that posted the video may be terminated. Please review the Vine Rules (http://vine.co/terms) for more information on these violations.