Back in early 2011, Ben Schaechter, Sam Grossberg and Paul Kompfner launched GoPollGo to address a perceived deficiency in analytics, geographical info and social integrations from the Web’s go-to polling platforms. Six-months later, with a round of seed funding in tow, the startup decided to re-focus on Twitter — on providing everyday users with the ability to more easily poll their users and drill down into realtime analytics, not unlike WayIn.

Today, GoPollGo offers open graph integration, allows users to embed multimedia within their polls, embed polls on any website and recently launched an app for iOS to offer a more synchronized user experience across platforms. Since launching, the startup has begun working with big media properties like ABC and Yahoo to allow them to offer realtime polling and audience analysis, powering ABC news’ realtime Q&A polling for the Presidential debates, for example.

While these partnerships have provided some monetization opportunities for GoPollGo, it has still been unclear how the team was going to construct a viable, sustainable business. But, today, we got a peek into the future of GoPollGo-as-a-business, with the launch of GoPollGo Promoted Polls. Essentially, the startup’s Promoted Polls now allow anyone to leverage the startup’s audience to get responses to their questions quickly.

“Think of it as simple, speedy market research,” says founder Ben Schaecther (who, for sake of full disclosure, is a former TechCrunch developer). 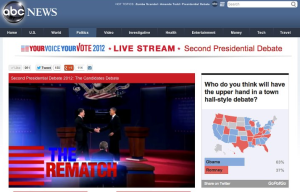 Now, when someone creates a poll, they’ll have the ability to promote that poll to get responses for a fee of $0.50-per-response. Similar to what Twitter now does with Promoted Tweets, this means that GoPollGo will intersperse promoted polls within the stream of questions that users cycle through and interact with on a daily basis. [Except, of course, Twitter pushes Promoted Tweets into specific users’ streams, while on GoPollGo, people are just responding randomly to polls, so the startup will surface its own Promoted Polls more randomly as well, though they’ll have a set duration.]

To incentivize businesses, media and individual power users — and make sure they get their money’s worth — GoPollGo guarantees that data for Promoted Polls will be gathered within 48 hours, or the startup will refund the promoter. (The aforementioned “set duration.) The founder says that, although this system is new, the team has already seen thousands of requests for this functionality on its sign-up form.

Today, Promoted Polls opens in a kind of private beta format so that the team can ensure that it’s able to scale the back-end support efficiently without affecting the overall GoPollGo user experience. The tool is currently limited to one-questions polls and focuses mainly on mobile, but the team plans to offer more robust capabilities (and open the whole shabang publicly in self-serve mode) in the near future — along with potentially offering rev-share opportunities for survey takers themselves.

Going forward, as the GPG community continues to increase, Schaechter says that the team will begin rolling out new filters (like gender, age and location, for example) that will be offered for a higher price.

In the big picture, the team is eager to transform from just-another-social-polling tool (albeit an addictive one) to a sustainable business with consumer and business-facing services that provide more monetization opportunities. To add more value and a little more diversification, the founder think that GoPollGo’s software can be easily adapted to surveys. 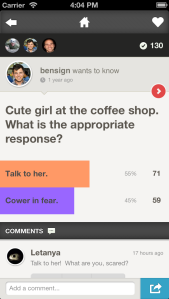 SurveyMonkey’s colossal raise (and valuation) last week proves unequivocally the (surprising) size of the opportunity in offering an easy-to-use, cloud-based survey tool. SurveyMonkey has been able to monetize by offering pay-per-response surveys, and it wouldn’t be a stretch for GoPollGo to begin offering a similar service.

While Google offers a basic poll and survey service (what don’t they offer, seriously,) it comes at a $0.10 price point and most other similar tools fall on the more expensive end of the spectrum. Plus, GoPollGo’s community has begun to offer more incentives to those interested in the quick-turnaround option of Promoted Polls, as it’s now seeing 25 percent of its iOS users return daily, pulling in users’ social graphs so that whenever someone they follow creates a poll, etc., they get a push notification.

In turn, its registered user base has increased 20 percent in the last 2.5 weeks, while the app has accumulated “thousands of downloads” and power users are taking as many as 50 to 60 polls per session, Schaechter says.

The nice thing about GoPollGo and one of the reasons it’s been able to sustain traffic (and that widgets typically receive about 1 million to 2.5 million page views per month) is that users don’t have to login to vote, they can do so straight from the widget or embed — wherever the poll happens to live. None of the users who voted during its ABC integration, for example, were required to login with GoPollGo to interact with the poll. And that’s key.

Things could get thornier the more robust Promoted Polls functionality becomes, but it’s a step in the right direction.

For more, you can find GoPollGo’s video demo below or check out their iOS app here.