Open Garden, the TechCrunch Disrupt New York 2012 Battlefield finalist which allows users to share their wireless data connections with others, is today announcing its first partnership with another software company, TextMe, a mobile communications app with over 8 million users. The deal will allow users of TextMe on Android tablets the ability to text and make voice or video calls using their tablet, even when they don’t have a Wi-Fi connection present.

If that sounds pretty wild, well, that’s because it is. Open Garden’s founders have a history of working with disruptive communications technologies – co-founder Micha Benoliel previously worked at Skype; Stanislav Shalunov worked on Internet 2 and BitTorrent; and Greg Hazel was previously the lead programmer of the popular BitTorrent client μTorrent.

In May 2012, the team announced Open Garden debut on Disrupt’s stage. The proprietary, patented technology crowdsources connectivity, by connecting those without internet connections with those willing to share their bandwidth. The details of how these mesh networks work – at least as much as the founders were willing to share – is described here, if you’re interested in additional background. The free app currently works on Android, Mac and PC, though it may eventually have to introduce a credit system in order to address freeloaders who surf, but never share their own connections when available.

Of course, on mobile devices like smartphones, you generally have a network connection – a 3G or 4G signal –  available to you, which makes the technology more interesting as a way to boost connection speeds by bundling your cellular connection together with the connections other Open Garden users are sharing.

However, where the service makes even more sense is on tablets, as many users have opted for Wi-Fi only devices, and lack network access when taking their tablets out of the home or workplace.

That’s where Open Garden can be an advantage, assuming it can build up its user base and gain significant traction. On that front, the startup is doing well so far. A month after its launch, the company announced reaching 100,000 users. In September, following its raise of $2 million in seed funding, it had grown to 250,000 users. Today, co-founder Benoliel tells us that Open Garden has close to 1 million users who have installed its app.

He tells us that the app benefitted from being featured in Google Play, and the software is more stable now, which has driven the downloads higher. “We needed more users to debug and improve the application,” he says. “It is a mesh networking app, and the best way to test it is to be live.” They’ve now passed that initial hurdle of needing enough users to test the app in order to improve it, which in turn brings in more users. The network effect is starting to kick in. 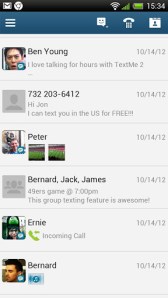 To use the service with TextMe, you have to have both apps installed on your device, but no other specific configuration is necessary. “If the tablet has no Wi-Fi connectivity, Open Garden automatically routes the traffic through the 3G or 4G connectivity of the phone or another Open Garden user with connectivity,” Benoliel explains. “There is no user intervention, all is done in the background seamlessly.”

Of course, if no Open Garden devices are around, then there’s no connectivity, as there would have been otherwise. Benoliel says the service has been tested with text, voice and video so far, and it works. Unfortunately, I don’t personally have an Android tablet on hand for testing purposes, so your mileage may vary, I suppose. It’s worth pointing out that TextMe, though highly rated on Google Play, occasionally has its own issues in terms of call quality and performance, as all mobile communications apps do sometimes. It may not be immediately obvious whether any issues you may encounter are on Open Garden’s side, or TextMe’s side of things if they occur.

TextMe and Open Garden are available as free downloads in Google Play.