Apple has released its 2013 Supplier Responsibility Progress Report, and it features a number of updates from last year, including Apple’s decision to join the Fair Labor Association (a notable first), and conduct audits of its suppliers in tandem with that outside watchdog organization. The results seem to be a tightening of Apple’s code of conduct for suppliers all around, in terms of monitoring, penalties and programs to improve conditions.

Apple conducted 72 percent more audits in 2012 than it did in 2011, for example, totaling 393 audits across facilities employing 1.5 million workers. All types of audits increased for the year, including firs-time, repeat, process safety assessments and specialized environmental audits, but the last one took the biggest jumps vs. previous years. In 2012, Apple conducted 55 focused environmental audits, which is a 293 percent increase over the number it ran in 2011. The Mac maker works with outside associations in this area, too, just as it does with the FLA regarding labor, including the Natural Defense Council, the EPA and the Institute of Public and Environmental Affairs.

The supplier audits also actually resulted in more severe punitive action than usual. Apple has faced criticism in the past for doling out corrective measures that seem rather toothless – most often putting suppliers “on probation,” meaning they’ll be watched more closely for future violations. But one supplier fell afoul of Apple’s measures to protect against underage labor, with 74 cases counted at a single facility. Apple terminated the relationship with that offending party entirely, proving that there are real consequences for companies that ignore its code of conduct and local labor laws.

Apple also came down harder on companies for compliance with working hour regulations, and changed its policies and practices in monitoring them to be more effective. In 2012, Apple started doing real-time work hour tracking on a weekly basis for over 1 million of the employees at its supplier companies, and publishing data on its progress every month. That led to a 92 percent compliance rate with its 60 hour maximum work week, as laid out in the Apple Supplier Code of Conduct, and Apple says overall work weeks averaged less than 50 hours. 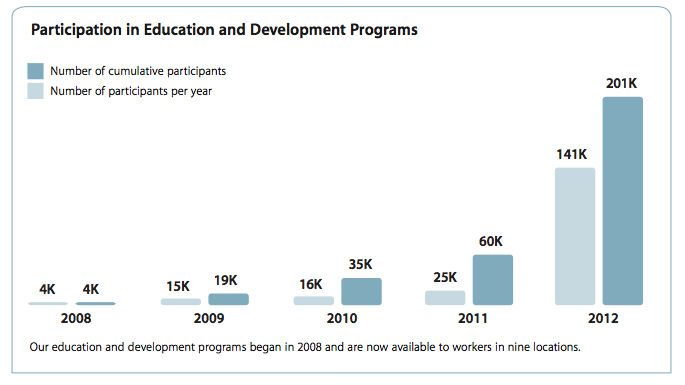 Another area of improvement for Apple was in participation in its training and education programs. There were 1.32 million workers trained on local laws, worker rights, health and safety and Apple’s own Code of Conduct during 2012, a 97 percent increase over 2011’s 670,000. Apple also provided more free educational opportunities to workers than ever before, with 201,000 cumulative participants in those programs, up 235 percent from 60,000 in 2011.

Apple’s transparency definitely improved over the course of 2012 when it comes to its efforts around supplier responsibility and maintaining healthy and safe work environments, and that’s something Apple CEO Tim Cook clearly undertook as a conscious effort. That’s not to say that Apple didn’t have its fair share of labor issues during the year (issues around the demanding requirements for building the iPhone 5 come to mind), but especially in the way that Apple has allowed disinterested third parties to come in and aid with its monitoring efforts, 2012 was definitely the most significant year yet in terms of improvements made to its stance on supplier responsibility.