What has investors intrigued? Distil.it co-founder and CEO Rami Essaid believes that Distil.it is the first Content Protection Network (CPN) that helps businesses identify and block content scraping and data theft. Its technology allows it to scan your website’s traffic and make realtime decisions, distinguishing between your customers and bots, while accelerating your content through 15 global nodes to reduce server loads and improve site speed.

A part of the inaugural class of TechStars Cloud in early 2012, Distil.it’s CEO tells us that the company has been experiencing 35 percent month-over-month revenue growth over the last four months, part of what has made it so appealing to investors. There’s also the fact that this has become a growing problem for businesses. When someone scrapes and duplicates content, they steal visitors, SEO rank and revenue. Not cool, bro. Not cool.

As to what makes Distil.it different: Essaid tells us that, unlike other solutions, the startup doesn’t rely on rate limiting to identify and stop bots, instead using “sophisticated code injections” to verify a connection’s identity and find automated agents. It then applies a layer of machine learning that enables it to discern the difference between bot traffic and human on a site-to-site basis.

The biggest differentiator from sites like Siteblackbox and Sentor, he says, is that when the site catches a malicious bot in action, it builds a signature to ensure that it’s never allowed to return. Distil.it then aggregates those signatures across all of its customers, crowdsourcing bot DNA so that every business gets to benefit from each bot captured. A digital community service.

With the new capital in tow, going forward, the startup plans to expand its cloud network footprint, spinning up four new data centers over the next quarter. It also is working to add more robust analytics to its user portals — tools that will help customers better identify who is trying to attack them, while giving them ways to monetize based on that traffic. 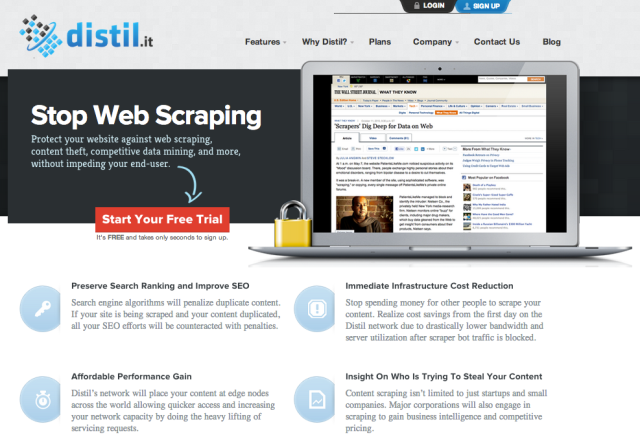