The outcry is deafening. “The Surface Pro is priced too high!” “I’ll just get a MacBook Air!” “Microsoft is the next RIM!” “I LOVE APPLES!”

Ignore the noise and look at the situation. The Surface Pro is priced just right. For its size and form, the Surface Pro is a powerhouse computing platform and priced to sell. It might not outsell the MacBook Air but that’s okay.

The Surface Pro is not the Surface with Windows RT. The Surface Pro is a full Windows 8 machine powered by a legit Intel chipset. It’s fully capable of running any desktop application and most high-end games. Dump RAW photos into Lightroom through USB 3.0. Convert MKV videos with Handbreak. Dock the system and play Far Cry 3. With the Surface Pro, as they say, the world is your oyster.

But Microsoft screwed up. The $499 Surface RT left a bad impression on most people when it launched last year. The ARM-based counterpart is limited in functions and barely has enough computing power to run system tasks. The Pro should have been released alongside the RT model.

As it stands right now, Microsoft has to regain a lot of hopeful optimism it had before launching the Surface RT. Those who were turned off by the RT model are approaching the Pro model with a lot more caution.

For $1,019 the Surface Pro offers a Core i5 CPU with an Intel HD Graphics 4000 GPU. There’s 64GB of storage, 4GB of RAM, USB 3.0, Mini DisplayPort and a digitizer pen allowing owners to turn the Surface into a Wacom-style input tablet (that’s big for some buyers). 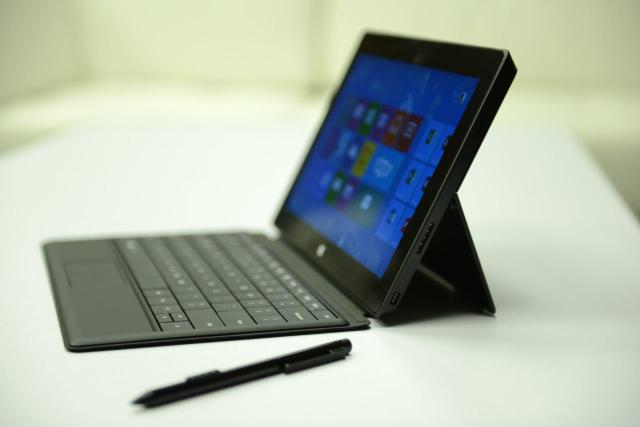 Spec for spec, the Surface Pro actually stacks up nicely against the MacBook Air. They’re about the same price and minus the touchscreen bits, they have about the same computing hardware. But they have different motives.

The $999 11-inch MacBook Air is Apple’s low-end device. Like the Surface RT, it offers just enough power to get by and nothing more. I wouldn’t recommend the base Air model for anyone that wants to venture outside of iPhoto or the web browser. It’s not a work machine; the $999 MacBook Air is a Facebook machine.

Microsoft built the Surface Pro for a different market. It’s not a base model. This is a serious machine aimed at the prosumer or enthusiast. This is the model that you buy if you want to get work done. With a price around a grand, it’s competing against similar Windows Ultrabooks or monster desktop replacement notebooks.

If priced any less, Microsoft would be setting the bar too low. PC makers often get stuck in a race to the bottom. By chasing the lowest price, consumers later expect inexpensive PCs. Microsoft wisely decided to avoid this game and price its first two PCs properly. The $499 Surface RT is on par with the iPad and the Surface Pro is competing with mid-range Windows notebooks.

Microsoft built the Surface family to be reference designs for future Windows 8 tablets. With these models,  Microsoft set the bar high enough that HP, Samsung, Dell and Asus will have to dig deep and reach high to beat. This bar also sets the expectation for future pricing. Anything lower would be considered cheap while anything higher should be viewed as a premium device.

The Surface Pro is not for everyone. It doesn’t have to be.

In fact, even before a single Surface Pro has been sold, Microsoft probably already considers its venture into the hardware business a success. Never before has a single Windows PC dominated the consumer mindset. The Surface Pro is a polarizing product. And that’s exactly what it should be. As Fast Company previously explained, your brand should piss someone off and I’ve never seen a PC that pisses people off like the Surface Pro.