Governments around the world, especially the U.S. government, are continuing to request more private data from Google. The search giant released a fresh transparency report this morning, revealing that the U.S. leads the world in information requests about users (8,438 requests for information from about 14,868 users). Google isn’t a fan of how governments force them to hand over data and freak out privacy-happy users, so the regular transparency report has been their (very) clever way of heightening public pressure on issues of government surveillance. 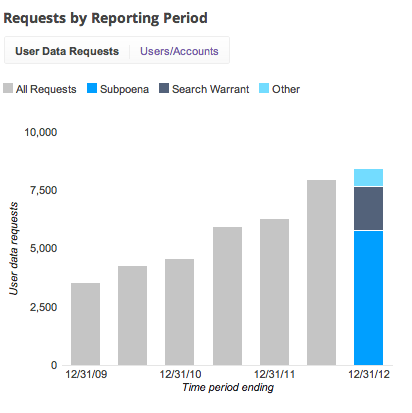 After the FBI surveillance of General David Petraeus’s correspondence with his mistress over Gmail sparked a full-blown scandal, the public got a lot more interested in the Electronic Communications Privacy Act (ECPA), which sets rules for government spying. This new transparency report now details the different legal methods under ECPA by which governments try to extract data from tech companies.

“68 percent of the requests Google received from government entities in the U.S. were through subpoenas,” explains the blog post. “These are requests for user-identifying information, issued under the Electronic Communications Privacy Act (“ECPA”), and are the easiest to get because they typically don’t involve judges.”

In an email to TechCrunch, a Google spokesman says that requests from the U.S. government are up 6 percent from the first half of 2012. Google’s compliance with requests is down slightly, from 90 percent to 88 percent.

Say what you will about Google’s approach to privacy, their transparency report has even been praised by privacy watch-dog, the Electronic Frontier Foundation. In Google’s move toward a more open (and exposed) world, the report has become a savvy method for the company to push back at governments, in a way consistent with their own value system. Kudos, Google. Kudos.