Photo and personal publishing company Shutterfly is continuing to refresh its mobile products with today’s relaunch of its Treat application for iOS, which follows the December overhaul of the company’s flagship app for photo gifts and prints. Treat, which originally launched in April of last year, then came to mobile in October, is a competitor to Apple’s Cards app, Sincerely Ink, Red Stamp and several other mobile greeting card applications. 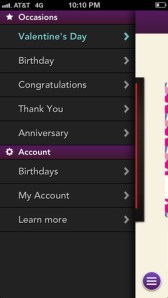 The app serves as an extension of the Treat online destination, where users can also customize a variety of greeting cards, and optionally send a gift card, for special occasions. Unlike the greeting cards offered by PunchBowl, for example, Treat cards are not digital, but are actually sent to recipients via postal mail.

The mobile application for iPhone, now offers 1,100 designs for special events like birthdays, anniversaries, Valentine’s Day, Congratulations, as well as the everyday like Thank You’s.

When the app had initially debuted, it had only included Birthdays. While the selection of event types has grown since then, it’s still a bit limited when compared with others like those startups mentioned above. However, the company tells us that selection will now begin to really grow with today’s relaunch, and it has plans to add Mother’s Day and Father’s Day cards this year.

The new app is also much faster (as much as 2-3 times faster on the iPhone 5) and it has made improvements to its user interface and navigation.

Treat, I do have to admit, offers a unique navigational element for sorting through its selection. In each category, a touch-based “wheel” pops up after you tap the button at the bottom-right of the screen (see the screenshot). From here, you turn the wheel to select who the card is for, what kind of greeting you want (e.g. “funny,” “heartfelt,” simply stated,” etc.) and whether or not you want a card that lets you include your own photos.

Treat users can also import their friends’ birthdays from their Facebook account, and can pull in photos from their Facebook albums. After completing your card, Treat will print the 5×7″ cards on high-quality paper and mail them for you. A handy scheduling option lets you knock out a year’s worth of birthdays in advance, which is really handy for the super-organized.

Although the newly refreshed app is a big step up from the original release, it had some quirks that don’t make it my favorite among those I’ve tried to date. For example, I had to guess how many characters I had for the text boxes on cards, and it had issues verifying one of the U.S. addresses I entered, although other apps had no problem with it. As it turns out, the message was only a copy bug – meaning, it should have told me “please enter your return address” instead of the (incorrect) warning “not a valid U.S. address.” Shutterfly says this will be fixed in a February update.

Treat for iPhone is a free download here in the App Store.