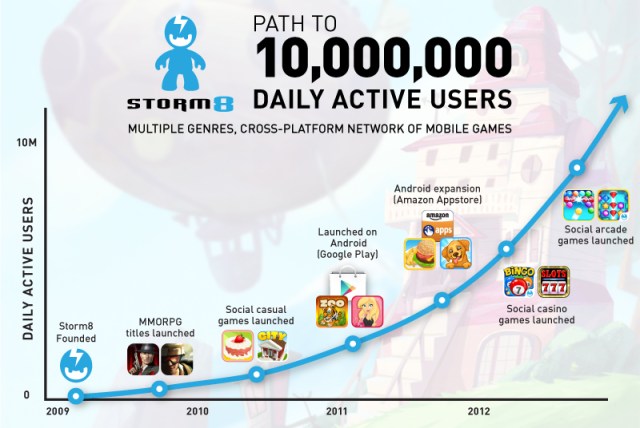 “We’re not a one-hit wonder. We never were and we are not a one-trick pony,” said CEO Perry Tam, who says their network encompasses about 200 million devices. “This is what has allowed us to grow steadily, consistently and remain profitable.”

Like many of the casual game developers that were early to Android and iOS, the company isn’t known for having the most unique titles. They’re all takes on proven genres like iMobsters (a mafia game) or Pet Shop Story and Fashion Story from the company’s casual label TeamLava.

But they were early to market — to both Android and Amazon’s Kindle platform — and they create games quickly and aggressively. They moved into social casino and arcade games recently with games like Bubble Mania and Slots. They’ve continued to grow headcount and reach even as younger gaming companies like Finland’s Supercell have emerged and crowded others out of the very top of the grossing charts. App tracking site AppAnnie, which compiles rankings and revenue, said they were the ninth biggest game developer by revenue on iOS with about 40 apps.

The advantage of having such a large reach means that the company won’t have to spend as much to acquire new users. They can just funnel players from one game into another. They could also pursue publishing, and help smaller third-party developers find audiences.

“We have taken the network approach,” Tam said. “That has allowed us to be sustainable and stay in this game for so long.”

The company hasn’t taken funding to date, which isn’t that unusual for the space. There are several either bootstrapped or lightly-funded mobile gaming companies out there like Temple Run-make Imangi Studios and Backflip Studios. The funding market has changed dramatically over the past year with Zynga’s poor performance on public markets scaring some investors away from the space. Plus, the cashflow from a successful mobile gaming business doesn’t make venture backing all that necessary. There were rumors though that the company was looking at a big $300 million round back in 2011, but it has not yet happened.

Tam said the company is focused on continuing to grow its network. Its also looking abroad toward international opportunities where they can localize games for different markets.