SkyNews has obtained a letter sent to Twitter subsidiary TweetDeck warning the company it has three months to file accounts or be struck off the U.K.’s business register. The letter, embedded below, is dated January 22 and addressed to the directors of TweetDeck. It states: “The Registrar of Companies gives notice that, unless cause is shown to the contrary, at the expiration of 3 months from the above date the name of TweetDeck Ltd will be struck off the register and the company will be dissolved.”

The letter follows a proposal to strike off added to TweetDeck’s Companies House listing earlier this month. TweetDeck was also fined for overdue U.K. account filings in December — as was Twitter, but Twitter has since filed its accounts, while TweetDeck has not.

TechCrunch understands that TweetDeck’s failure to file its U.K. accounts is part of a process to wind up the company’s status as a separate corporate entity to its parent company Twitter. We expect TweetDeck to be struck off the U.K. register in April when it exceeds Companies House’s final deadline for overdue account filing — but TweetDeck the product to continue to be developed by Twitter.

A Twitter spokesperson declined to comment on TweetDeck Ltd’s account filing situation but provided the following statement regarding Twitter’s commitment to developing TweetDeck the product: “TweetDeck gives the Twitter experience more flexibility and allows advanced users to gain valuable insight to what’s happening at this very moment on Twitter. We’ve been steadily innovating and improving TweetDeck, and expect to see much more of that to come.” 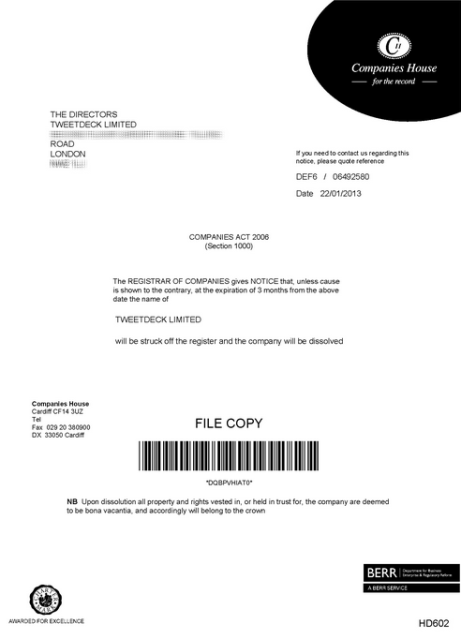