Visual content marketing service Reachli (formerly Pinerly), has raised a seed round from 500 Startups, PNP Ventures, Zelkova Ventures (Early Klout, Fab investors), Philquo Ventures (Fab investor), GVA ventures, and angel investors including William Lohse (invested in Pinterest’s first round), Howard Love (CEO Lovetoknow.com), Saeed Amidi (Plug and Play founder), plus a few others from the Valley. The round is still ongoing, but we hear that the company has raised just under a million so far.

The news of the funding comes hot on the heels of the $3 million investment into Pinterest analyst service Curalate, which also hit the wire this morning. (Curalate’s round was led by NEA and included participation from First Round Capital and MentorTech Ventures.)

These funding rounds, to some extent, are proof that investors are starting to take Pinterest seriously as a platform where brands can engage users, market and advertise to them, and hopefully then generate referrals that translate into bottom line ROI. Call it a third platform, behind Facebook and Twitter, perhaps, for brand marketing.

But while the various services targeting Pinterest, including startups like Pinfluencer, PinReach, Ohtootay, Pinalytics, and PinLeague, to name a few, are often lumped into the same bucket, Reachli rebranded from Pinerly this November in order to disassociate itself with Pinterest a bit, indicating that it’s not a Pinterest-only service, but one that works on the broader social web.

In other words, Reachli isn’t just buying into and building on top of the Pinterest platform and its associated growth, but is targeting the ongoing trend where users are increasingly socializing around images and media, as opposed to status updates. The company allows brands to promote their images and campaigns across these social networking services, and then provides the analytics that show how well the campaign performed. 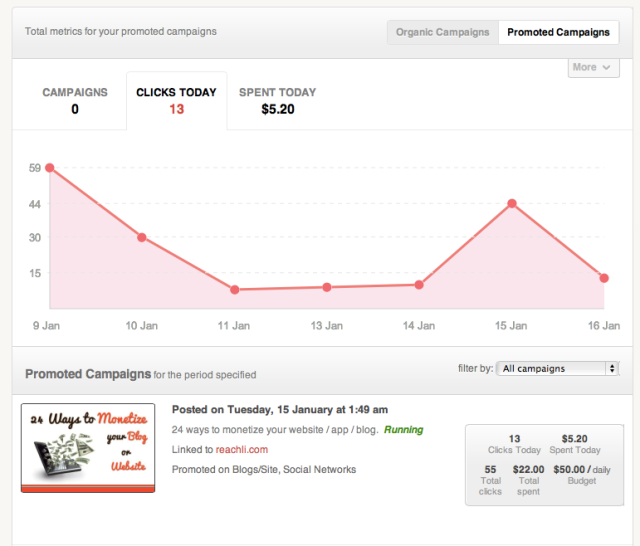 But what makes Reachli a bit different is that it also has amassed a network of over 2,000 publishers, allowing advertisers to promote their campaigns further across the web. These publishers include both website owners (around 500) and influencers on social media sites (1,500).

The company recently introduced these self-serve advertising and publishing platforms, which allow the publisher to integrate a Reachli code on their website through a one-time embed in order to participate in this wider network, and generate additional income. Reachli founder Rick Kats says that these campaigns can start at as little as $10, but they’ve also had some as high as $10,000. The advertiser uses the dashboard to put in their budget and keywords, and Reachli suggests the pay-per-click using its real-time bidding system. Advertisers only pay when clicks are relevant, he explains.

Reachli’s proprietary technology involves a relevancy algorithm to match campaigns with images on these sites, and then place an ad on it. This technology puts Reachli in more direct competition with ThingLink, for example. 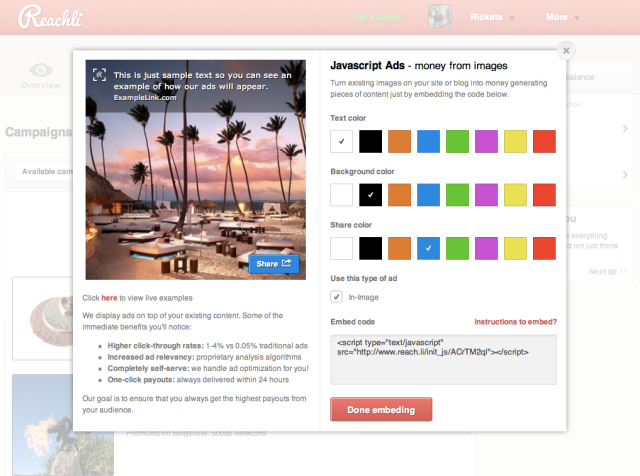 You can see what this looks like in this sample ad here. Reachli looks at the photo, and in real-time classifies it using keyword, context and photo-matching algorithms as a travel photo. It then places a travel ad on the photo itself, which appears when hovering over the image. Kats tells us that these in-image ads perform better – “as high as 1 to 4 percent click-through,” he says, because of their relevancy. (Traditional banner ads are 0.05 percent, he mentions).

Kats says his company has grown to support over 80,000 brands, agencies and content creators, and is now growing at 100 to 500 users per day, all organically. In the past, Reachli’s clients (some while it was Pinerly) have included Allrecipes, Glamour, Universal Music, Virgin Atlantic, David Yurman, and others.

Given Curalate’s recent raise, we’ll note that it, too, is used by hundreds of brands and agencies, including Michael Kors, Kraft, Real Simple, Edelman Digital and GroupM Next. 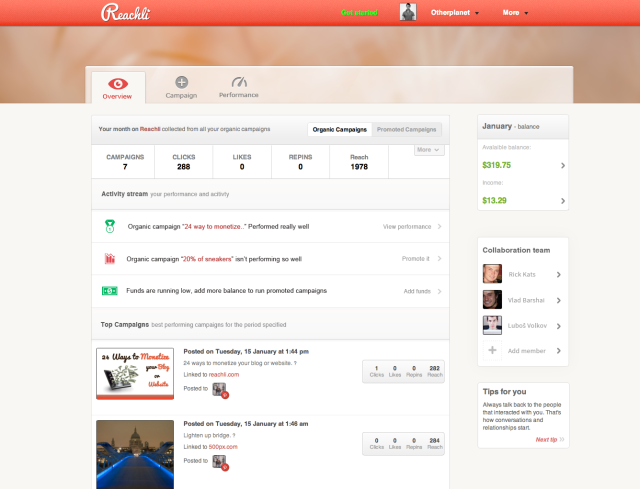 Going forward, Reachli will be focused on building even more native advertising products and tools, Kats says, as well as other ad editor improvements.