Global Grind, the NY-based digital media company funded by Accel Partners and hip-hop entrepreneur Russell Simmons, is finally taking mobile seriously with today’s relaunch – and really, it’s a start-from-scratch job – of its flagship mobile application by the same name. With today’s debut of Global Grind for iOS (Android to follow), the company is bringing custom mix of Music, Celebrity, Gossip, Entertainment, and Style news to mobile with a whole new look and feel.

It’s been a long road for Global Grind, which received its Series A from Jim Breyer at Accel back in August 2007. That was a time when we were calling such ventures “Web 2.0” sites, if you’ll recall. The company has since been through several pivots (and shakeups), moving from what was once something of a Digg competitor to the media company it is today, which is now pulling in just shy of $4 million in revenue, and, after accounting for its operating budget, has had “multiple months of being cash-flow positive,” according to Global Grind Head of Product, Robert Boyle. 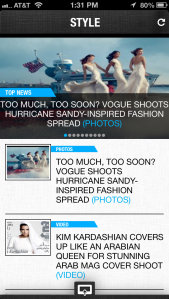 On the web, however, as one click through will tell you, the company relies heavily on advertisers and sponsors. Today, a giant Toyota takeover ad appears, for example, and I struggled to find the “X” button. (It’s the word “collapse.” Ugh.) The website content is wrapped in Toyota, too, and other ads are all over the place, to the extent that it’s almost difficult to read the articles. Toyota’s ad even returns when you click through to read anything. I’m telling you, it’s painful.

In comparison, the revamped mobile app is a breath of fresh air. There is only a minimal iAd banner running, but Boyle says that they decided to go light on ads to start, in order to focus on delivering a better user experience.

And thankfully so, because the website is a mess.

The new app is actually really attractive. It has been designed using the now-familiar left hand navigation which lets you browse through its featured news categories, which include Music, Style, Entertainment, and the more general “News.” This latter category is a mix of everything from politics to tech, to yes, even that crazy Te’o story that people can’t get enough of right now. 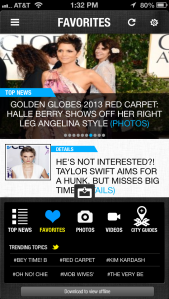 There’s also a unique navigational pop-up at the bottom of the screen, where you can filter content by photos and video, customize a “favorites” section by picking your favorite celebs, and even a City Guide which offers editorial recommendations for restaurants, drinks, and parties in Global Grind’s target markets of NY, LA, San Francisco, Seattle, Las Vegas, Chicago, Miami and DC. Offline support is available as well.

Boyle tells us that the new app, which replaces a stagnant 16-month old version with “minimal” usage, is meant to be a facelift for the Global Grind brand itself. “Our mobile app is where we want to go as a direction as the company, which is focusing very heavily on the user experience,” he says. “It’s about creating something that’s personalized and smart.”

If you occasionally dabble in non-tech news, you can grab the new app from here in iTunes. The Android version will arrive in Q2.