For those of you, like me, who hate incumbent car rental firms, Silvercar seems like a breath of fresh air. The startup is focused on providing a better quality of experience for airport car rentals, mainly by adding technology to its cars and using mobile apps as a way to simplify and improve the whole process.

The startup announced last month that its first market would be Dallas/Forth Worth. The company actually launched on Monday, making revenue for the first time after a long period of securing financing, getting cars, creating mobile apps, and getting the whole system to work together.

I’ve had high hopes for Silvercar to provide an alternative to the typical horrible experience of airport car rental. It sounds like a great idea. But it’s difficult to judge the quality of a service without actually trying it out, right? So I took a trip down to DFW for the day and demoed the Silvercar experience for myself.

Set up and reservations

Before flying down to Dallas, I downloaded the Silvercar app, created a profile, and booked my first car rental. The app requires a decent amount of user profile information before you get started, including the user’s name and password. In addition, Silvercar requires a valid drivers license number and phone number. Before picking up their cars, they’ll need to enter a valid credit card — not a debit card — and pre-select the insurance that they’d like to carry. (More on that later in pricing.)

Ultimately, the information that you enter is no more than you’d need for your standard car rental. But it will save you time later, since you don’t have to go over the information with a rental car agent at the Silvercar rental location.

Booking a reservation is as easy as picking a location (for now, just DFW), and selecting a date and time for pickup and return. Users can specify their flight details, but it’s not necessary. This information can also be added on Silvercar’s website, including profile information or reservation info. But since using the service requires the app for unlocking the vehicle, potential customers shouldn’t try to book anything unless they have an iPhone or Android phone and can download the app.

Getting in and getting around 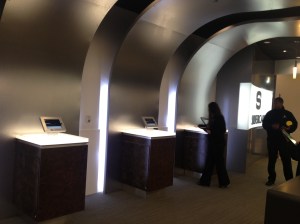 Silvercar is like most other car rental agencies in that it has a booth at DFW’s ConRAC (consolidated rental car facility). The big difference is that you generally don’t have to talk to personnel there unless you really want to, or unless you’re walking up on a whim.

The company has, hands down, the quickest time from airport terminal to getting into a rental car that you can possibly imagine. That’s because once you’ve got your profile built and have booked a reservation, you don’t actually have to talk to anyone to get the keys to your car or get on the road. You can walk right up to the cars in its designated parking area, choose the car you like (they’re all identical, so there’s not that much choice involved), and unlock it by scanning a QR code in the driver’s side windshield.

For walk-up users who perhaps haven’t heard of Silvercar, there are employees who can walk them through registration and booking through any of the iPad terminals at the booth. But they’re completely unnecessary for customers who have pre-booked. Just walk up to a car and get going. The Silvercar rental area has a gate that automatically recognizes when a car is leaving, thanks to low-power wireless signals.

Shutting down and closing out

There’s a similar process for closing out your Silvercar rental. Just drive the car through the gate and it automatically knows that you’re bringing it back. Once you’ve pulled in, the car wirelessly signals back to the home base how much gas is left in the tank and determines the cost of refilling it based on market rates from GasBuddy and other sources. That way there’s no exorbitant price gouging on gas upon return, although there is a $5 service fee attached when refilled.

Just as there was no need to talk to an attendant when checking out a car, there’s no need to do so when returning it. Silvercar automatically recognizes when the car has been returned, and simply creates an invoice on the fly that will be sent to the associated email address. I received my receipt while waiting for the shuttle to pick me up and take me back to the airport terminal. 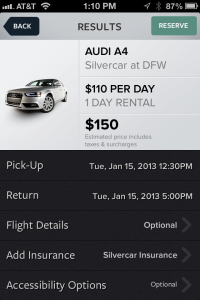 Unlike other rental car companies, Silvercar has just one make and model of vehicle: The Audi A4. And since all the cars are the same, there’s just one price, regardless of the one you pick.

Silvercar claims that its rates are competitive with similar full-sized rentals from other agencies. The difference being that rather than getting a Chevy Malibu or a Toyota Camry, you’re getting an Audi. And you’re doing so without having to pay for add-ons like GPS that come standard in all its vehicles. For my rental, the daily rate was $110 before taxes, gas, and insurance, but Silvercar says rates could vary depending on seasonality.

On the insurance side of things, Silvercar has a number of options depending on how comprehensive you want your coverage to be. You can select from your own personal insurance or corporate coverage, or if you need to get supplemental coverage from Silvercar, there is a $7 per day charge for just you and your belongings, $28 charge for collision insurance, or $14 for liability insurance. Since I don’t have car insurance and have never driven a car as nice as an Audi before (and am unlikely to again), I picked the $49 “everything you need” option, which includes all that.

While it was better than any other rental car experience I’ve ever had, it wasn’t completely without some minor snags. For instance, I had some difficulty getting the mobile app to accept my credit card info. I ended up entering it through the web experience, so it eventually worked out, but that could be problematic for a customer in a rush. The reservation booking system also had a weird bug related to picking the correct day of the week. And, frankly, I’m not a fan of the time slider that runs along the bottom of the reservation page — it just doesn’t seem intuitive.

Other than that, the only problem I had was finding a car that would unlock when I scanned its QR code. I tried three cars on the lot before I found one that would unlock. The first said it was unavailable. The second said it was not in the system. But I’m pretty sure all of these technical problems were second-day issues that will be cleared up pretty quickly.

And other technical details 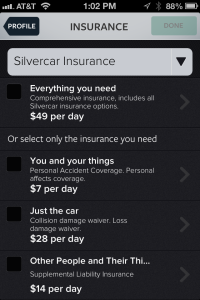 All the Audi A4s that Silvercar has available are tricked out with certain features to make the experience unique. In addition to scanning a QR code to unlock the vehicle and let the company know which one you’re taking out, users can also connect their phones with the cars. Phones can be paired via Bluetooth to enable drivers to sync up their address books and make hands-free calls while on the go. The car also has a built-in 3G data connection, which allows passengers with tablets and laptops and otherwise unconnected devices to have Internet access through in-car Wi-Fi.

For urban transportation, there’s Uber. In the hotel industry, there are places like the W. In air travel, there’s now Blackjet. Each costs a premium over standard or economy options, but promise a better, premium experience to users. There didn’t exist any comparable offering in the rental car industry before this. That’s one reason Schneider and the company’s investors think the startup will prosper in what is generally a commodified marketplace.

I’m usually a cheap traveler, and don’t know that I personally would pay the premium to use Silvercar. (I almost exclusively book economy cars when I rent.) But I could definitely see business travelers flocking to this service. The ease of getting in and out of the airport rental dock is well worth the time users would save. And while I didn’t drive my Silvercar for very long, I’m assuming that the quality of the Audi A4 will continue to hold true over time.

Some readers might be wondering, “Why launch in Dallas?” And “When is Silvercar coming to my city?”

The short answer, at least for the first question, is that Silvercar launched in DFW because it was able to get space at the airport’s ConRAC, which is generally the place at the airport where all the rental car booths are congregated. The thing is, those consolidated facilities only have a certain amount of room, and rental car agencies typically sign long-term leases for the spaces, on the order of five to 10 years.

DFW was one of the airports that had an opening in its ConRAC, and so Silvercar decided it would be a good place to launch. In addition to that opening, there are a fair number of business travelers who come through the airport, for whom a luxury vehicle at a decent rental price probably doesn’t seem like a bad deal.

According to Schneider, Silvercar is interested in expanding, especially to markets like San Francisco, Seattle, Chicago, etc. — markets that are tech-savvy and have a decent number of customers for what is (admittedly) a premium-type experience. The main problem is getting into the ConRAC facilities in those markets. Even so, the startup hopes to roll out into one new market per quarter.

But realistically, Schneider wants to prove that the Silvercar model works before the company starts aggressively expanding and setting up shop all over the country. It’s still just the first inning of what is a very long matchup, between a tech-focused upstart like Silvercar and an industry that hasn’t changed a whole hell of a lot over the last few decades.

Disclosure: Silvercar paid for my airfare to visit the Dallas facility and test out the service.