Locu, a local business data provider which extracts structured data from business websites and then makes it available via an API, is today announcing two major new partnerships, specifically for its restaurant data: CitySearch and TripAdvisor. The news comes only a couple of months after OpenTable signed with Locu on a similar deal.

The new partnerships will expand Locu’s reach to TripAdvisor and CitySearch’s users on both web and mobile, offering access to restaurants’ current menus, as well as their ever-changing daily specials, wine lists and more. The updates come from those restaurant owners who have signed up with Locu to take ownership of their data in order to use their pages on sites like OpenTable as a marketing tool to bring in customers with their ongoing promotions. 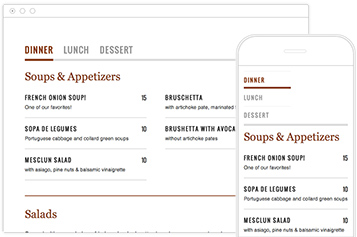 The OpenTable partnership put Locu’s service in front of some 15,000 potential customers in the U.S., 4,000 in the U.K., and others in Canada. (OpenTable doesn’t report data on Canada). In the same way, the new partnerships will also expand Locu’s reach to those businesses that have never yet before heard of the service, but will find the new listings referenced as “powered by Locu,” upon launch.

Locu emerged from Sir Tim Berners-Lee’s lab at MIT with lofty goal of providing structure to the world’s information. It began with the notoriously difficult restaurant industry, whose websites have traditionally been a mess, often including Flash-based webpages, for example. The company uses a proprietary machine-learning system to automatically extract data about local businesses from those websites, and it then leverages crowd workers trained to clean up and correct the data using special markup language.

The end result is machine-readable data that can then be offered to others via an API. Today, Locu has hundreds of API partners, which in addition to the bigger names above, also include Timeout, CityVoter, Maluuba and more.

The majority of Locu’s data today is from restaurants, but co-founder  Rene Reinsberg says he expects that to change by year-end 2013, as Locu rapidly moves into spas, salons, and other service-based businesses. “We’re really thinking about some of these other verticals,” says Reinsberg, “and some of these other verticals require slightly different technology because not as much information may be online.” In other words, the company is now working to develop a new set of tools to pull in “offline data” into its platform and API.

Those technologies would also include the use of crowdsourcing, which Locu has experience with. But while its current cloud-based workforce is spread around the world, to gain access to this offline data – say, by having users walk into businesses and snap photos, for example, or simply dialing the business and asking questions – it would need to develop a larger work force here in the U.S. Reinsberg says Locu has not yet decided whether to partner with another businesses for access to this data or to build something itself. He says the company is currently testing a variety of solutions, but has no immediate partnership plans on this front.

Locu is scaling its web-scraped data collection quickly. In November, it had around half a million businesses in its database, and now that number is close to 1 million. TripAdvisor and CitySearch’s integrations are not fully live, but they will be over the course of the next few weeks. As of now, Locu’s menus are already live on over 100,000 restaurants on the Citysearch mobile site (for example), and tomorrow morning, those will be live on the web as well (again, for example).

The company also says it plans to ramp up to cover 700,000 venues, including restaurants, spas and other verticals. Citysearch is in over 500 markets across the U.S. but the initial rollout will focus heavily on 10 markets: L.A., NY, Chicago, San Francisco, Portland, Austin, Seattle, Houston, Philadelphia, and Atlanta.

Meanwhile, Locu’s data will be integrated to tens of thousands of TripAdvisor’s more than one million restaurant listings globally, as the company is primarily drawing from Locu’s U.S. database. TripAdvisor says it expects the changes to roll out in February.