Dell, the Texas-based technology company that helped make the desktop personal computer mainstream, is reportedly in talks to go private with the help of private equity firms, according to a report issued by Bloomberg news citing sources familiar with the situation.

Dell’s stock, which is listed on the NASDAQ, is currently experiencing a skyrocketing share price apparently in response to the news. Within minutes of Bloomberg’s report, Dell’s stock price shot up more than 15 percent from around $10.92 per share to more than $12.70 per share. 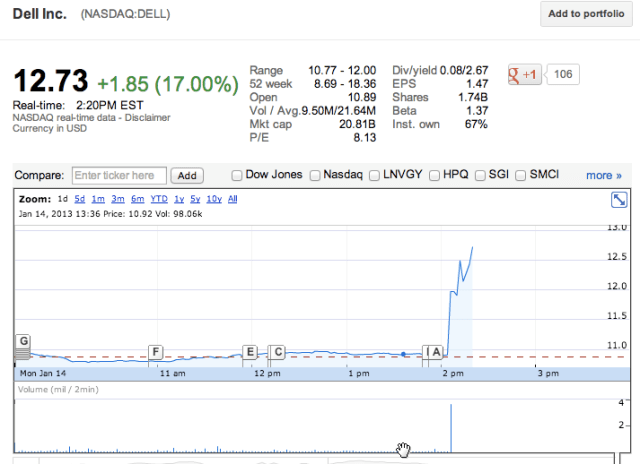 Dell was founded in 1984 and held its initial public offering in 1988. The company’s market cap is currently around $20 billion. According to the Bloomberg report, Dell is in talks with “at least two” private equity firms who could finance the deal.

This is not the first time take-private rumors have swirled around Dell in recent years. Back in 2010 the company was reported to be looking into going private after experiencing a lackluster stock market performance. At that time, the company’s top-level executives did not rule out that taking the company out of the glare of the public markets could be a smart move.

This rumor may inspire a bit of schadenfreude in those who have kept tabs on the tech industry for a while now. When asked about Apple back in 1997, Michael Dell famously said: “What would I do? I’d shut it down and give the money back to the shareholders.” But it bears mention that going private through a leveraged buyout is by no means a method of shutting down a company — it does, however, often signal that serious layoffs and restructuring could be on deck.

We’ve reached out to Dell for comment and will update this with any information we receive.