Salesforce.com CEO Marc Benioff is a charismatic guy for someone who leads a company that serves the stodgy world of the enterprise. He’s so well-recognized that he was put on stage this past week in Las Vegas to give a keynote at CES, the world’s largest consumer electronics show. Let me say that again: an enterprise guy gave a keynote address at the world’s largest consumer gizmo show. That has to be a first.

But there is something nagging at me about Benioff. For all his boasting and vision of the future, Salesforce.com’s income statement shows a considerable loss. And so while I consider Salesforce.com an innovator, I get hung up on what the numbers say. In part for my own benefit, I took a look at the company’s financial data and what others are saying about Benioff. I did this because I sense a certain amount of risk Salesforce.com is taking by showing such a loss. Of course, the swashbucklers will say: “But matey, this is the land of pirates and scalawags — risk is just part of the sword fight. Here, have a whiskey.”

The worst thoughts I have are of Benioff’s castle crashing down if the tide does not turn and investors sense trouble. “Walk down the plank of my billion-dollar sailboat, you foolish ninny, Larry is back to buy you up. Or do you want to face the sharks? They can smell you from here. How about a dime for what’s worth a dollar?”

Creative license is not just for wise-ass journalists, it’s also a game the powerful love to play. It’s not an entirely far-fetched scenario for a company’s stock to take a beating. That’s clear. Salesforce.com, though, has lots of supporters, including Motley Fool, which is bullish on Salesforce.com. It may look ugly but all is not what it appears to be:

SalesForce.com is a battleground stock with lots of hype and even more haters. But even the haters cannot deny that SalesForce.com has provided its investors with tremendous returns over the past few years. Investors often look at the company’s earnings and wonder how the heck this stock price keeps climbing. The answer is simple: they continue to grow cash flows from operations. On the income statement, much of their revenue gets deferred over the life of the contract, while they still incur marketing and overhead costs immediately. All of that (plus their extremely high spending on Marketing), makes for an ugly income statement. But their cash flow and rapidly growing market share are beautiful.

Yes, its revenues show the success of the SaaS model, Benioff’s drive and a cohesive corporate culture. Revenues continue to climb from about $1 billion in 2009 to $2.25 billion in 2012. But in turn, Salesforce.com net income has dropped from $80 million in January 2010 to a negative of $220 million as of October 31, 2012.

Here’s a breakout from Seeking Alpha: 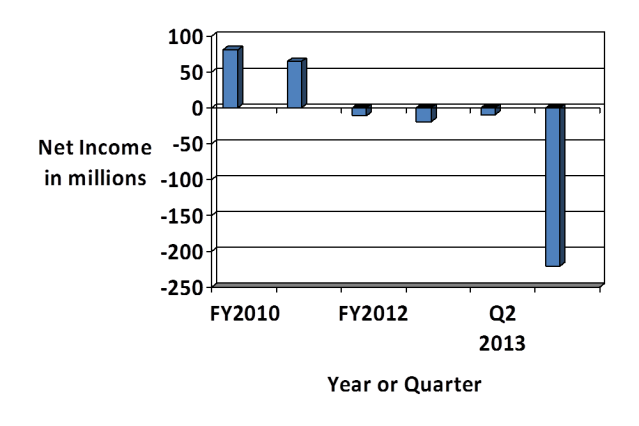 Salesforce.com does not expect to have profits for the foreseeable future, sccording to a 10-Q filed in the Fall as pointed out in a Forbes post by Jeff Bailey, editor of YCharts:

We have incurred net losses in each fiscal quarter since July 31, 2011. In addition, we expect our costs to increase as a result of decisions made for our long-term benefit, such as equity awards and business combinations. If our revenue does not grow to offset these expected increased costs, we will not be able to return to profitability and we may continue to incur net losses, on a U.S. GAAP basis.

Revenues do continue to increase but you also have to consider what it is costing the company to do that. Marketing costs now represent more than 50 percent of revenues. And the company keeps hiring. As of January 31, 2012, Salesforce.com had 7,785 staff up from 5,306 a year earlier. In its investor call at the end of November, Salesforce.com said it added more than 550 new employees in the third quarter, including about 250 people from its acquisition of Buddy Media. That puts its total headcount to more than 9,300, up 34 percent from the third quarter last year. 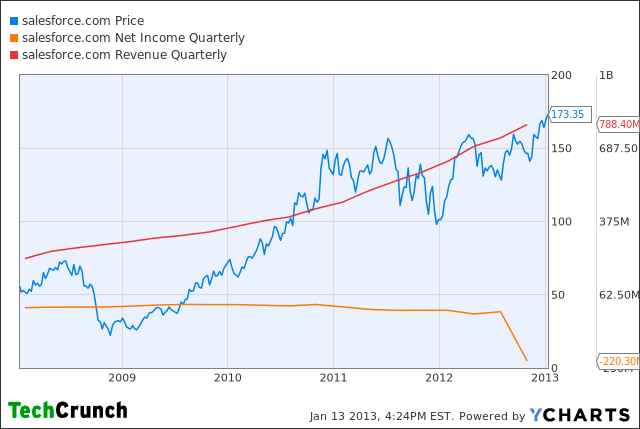 In the meantime, Benioff boasted on CNBC on Wednesday that the company has made $1 billion in acquisitions. Still, it now faces an even tougher battle with Oracle, which last month acquired Eloqua, a marketing automation company. Salesforce.com now has to be on the hunt for an acquisition of its own. The problem? Salesforce.com doesn’t have the cash reserves that Oracle has. Granted, Oracle is a much more established company, with $45 billion in major acquisitions over the past several years.

So What’s Wrong Here If Anything?

Las Vegas is built on the illusion that is America. It comes of the belief that the future is paved with gold. Benioff sells that dream every day. He has a command of the language about “social” and the “cloud” that resonates  with business. He talks about connecting businesses with Facebook and Twitter. How social technologies will change every business. But its CRM business is still its bread and butter, and CRM is now considered a pretty mature category. Social CRM is the new play for Salesforce.com. It sounds great but the cost of selling it is proving considerable.

I know a lot of smart people at Salesforce.com. I love its platform play and how it is building  a developer community. But as well, Benioff does not have all the answers and should be viewed with skepticism even if he is an enterprise guy who can wow a consumer electronics crowd.