Google just announced that it has launched a beta channel for its Chrome for Android browser. This means you can get early access to new features, of course, but the beta versions will obviously not be quite as polished as the stable releases. The current beta, which is available here, is up to 30 percent faster in completing some benchmarks and offers a number of HTML5 features like CSS Filters that aren’t available in the stable version yet. But Google also warns that it’s a bit sluggish on the Galaxy Nexus and Nexus S.

As Google Chrome technical program manager Jason Kersey warns users in today’s announcement, “just like our other Beta versions, the new features may be a little rough around the edges, but we’ll be pushing periodic updates so you can test out our latest work as soon as it’s ready.” He also notes that Chrome for Android now “benefits from all the speed, security and other improvements that have been landing on Chrome’s other platforms. 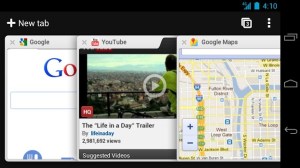 Unlike on the desktop, you will be able to run the stable and beta versions in parallel without having any bugs in the early release version affect your regular browser usage. On the desktop, Google also offers the even more developer-oriented dev and Canary channels. It’s not clear if Google has any plans to also bring those to Android.