If you’re familiar with Birchbox — the subscription service that delivers boxes of cosmetics and beauty products to your doorstep — you know that the New York City-based startup has taken off in the U.S. since launching in September 2010. The service, which was initially targeted only at women and beauty product-centric, has begun to expand its scope into new verticals, launching a subscription service for men (grooming kits) and moving into entertaining and design.

While popular in the U.S., Birchbox has also begun to expand internationally of late, acquiring its French clone, JolieBox, last September, which allowed it to move into France, the UK, Spain and several other European markets. Today, however, the startup is officially launching a web presence in the UK under birchbox.co.uk, its new UK beauty portal, with its first boxes to begin shipping on the 16th of January.

Yes, Birchbox was already servicing the UK through Joliebox, however, what’s significant is that it will continue to operate in its other markets as Joliebox, yet it has clearly decided to pull its UK branch under the mothership’s brand. Partly, that’s due to the English language connection, so the branding makes sense for the UK.

The other side, which Birchbox is now unable to ignore: The “S” Factor, a.k.a. the Samwer Brothers, whose Rocket Internet has backed its very own Birchbox clone, called Glossybox. A Samwer clone isn’t always threatening, but in this case, as Ingrid wrote last month, Glossybox now has $72 million in funding and has shipped two million boxes already. Not only that, it’s now operating in 16 countries. That’s at least 10 more than Birchbox, and it’s got a strong presence in the UK.

Therefore, it seems a smart move for Birchbox to begin uniting its subgroups under its original brand to help combat the competition that’s clearly growing from Glossybox. As Ingrid pointed out at the time, Rocket Internet is “sometimes known for being reticent” in regard to its user numbers for its portfolio companies, but not with Glossybox. They want to show off their traction.

Either way, no one will argue with the fact that female-oriented social networking (cough, Pinterest) and eCommerce have taken off big time recently. And the subscription commerce space is a big factor there, with Kiwi Crate, Babbaco, Citrus Lane, StitchFix among others jumping in the water alongside it. Plus, its had big success with its customized, so-called “try, learn, buy” model, catering to men and women who want to test out cool new products and want that exclusive and insider-y experience.

That “try, learn and buy approach” has taken off among the female demographic, which has been known for becoming habitual customers of a single cosmetic or beauty product/brand. Of course, there’s a huge market out there, tons of brands and product lines that may be superior, cheaper, or offer more value. Birchbox offers a simple, inexpensive way for women (and now men) to try out beauty products, pairing product trials with editorial content and eCommerce to make search, discovery and purchase that much easier.

Birchbox now has 300,000 subscribers and has raised just under $12 million to date. 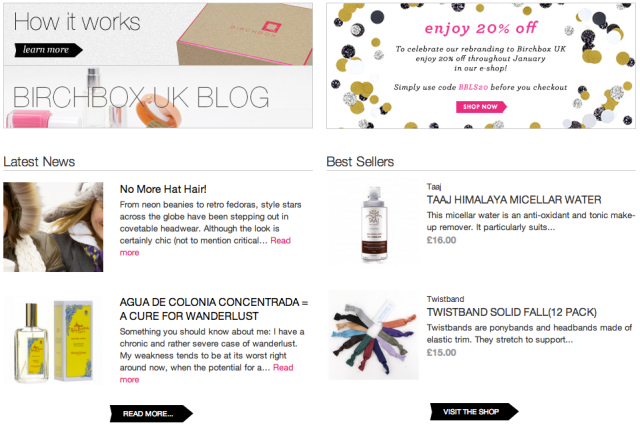