Online venture capital firm FundersClub is pioneering equity crowdfunding and today demonstrated the value of bringing on dozens of investors rather than a handful. E-commerce startup Soldsie just raised $425,000 from 72 investors through FundersClub, and ended up hiring one. New Chief Scientist Yun-Fang Juan, a founding engineer of Facebook’s ads team, discovered Soldsie thanks to FundersClub.

The JOBS Act that eases restrictions on equity crowdfunding hasn’t been finalized yet, but enough of it is in place to legalize FundersClub. The Y Combinator graduate launched in July to pick promising startups and helps them raise venture capital from the crowd through its online platform. Accredited investors (people who earn $200,000 a year or have a net worth over $1 million) can browse startups on FundersClub, research their businesses, and then invest as little as $1,000 in exchange for equity in the startup. All the legal paperwork and money transfer happens online.

FundersClub’s opportunity to become a core piece of venture capital infrastructure helped it raise the biggest seed round in YC alum history — $6 million from big names like First Round Capital, Felicis Ventures, Chris Dixon, and Aaron Levie. FundersClub’s goal of offering up the highest potential startups is aligned with investors, because both only get paid if the companies succeed.

Why FundersClub Is In Fact Legal

Bear with me for a moment, as this gets a bit thick but it’s really important to understanding crowdfunding.

The SEC has undoubtedly been watching FundersClub as it closed its first round of funding for startup Virool last month. Had it objected, FundersClub would have been slapped with a lawsuit by now. I raised questions about whether FundersClub was operating illegally as an unregistered broker-dealer, but after speaking with its legal team, I’m convinced it’s in the clear.

FundersClub acts not as a broker-dealer that handles money from crowds of investors, but as a venture capital advisor. This is possible thanks to the JOBS Act, which passed in March 2012.

Parts of the Jumpstart Our Business Startups Act won’t go into effect until the SEC finishes the rule-writing phase. These include Title 3 which allows unaccredited investors to put in money, and Title 2 Section 201 A, which allows for general solicitation — the ability for startups to openly promote that they’re raising money. However, Title 2 Section 201 C of the JOBS Act went into effect as soon as it was passed, and creates an exception to the broker-dealer rule and permits what FundersClub is doing.

The Value Of A Crowded Cap Table

Startups typically choose to take money from a VC or angel for one of two reasons. Either they get a high valuation and don’t have to give up much equity for the money, or the investor can offer some additional value beyond their cash. This includes strategy advice, business development or funding connections, assistance with hiring, or access to additional funding down the road. Top-tier VCs and angels are the ones that can help the most. 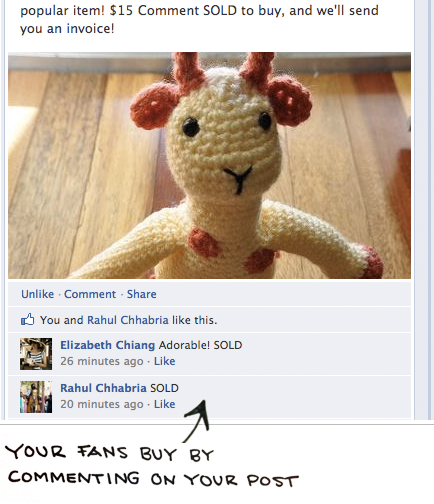 So why take on crowdfunding? Because bringing on a small army of investors can provide startups with evangelists, beta testers, and access to a huge network of people they’d want to meet. Case in point: Soldsie, an e-commerce startup that lets people buy things through Facebook comment reels, just closed its $425,000 seed round through FundersClub and hired a world-class engineer in the process.

Soldsie co-founder Arrel Gray tells me “We knew we were going to raise a round but we were kind of dreading it. We wanted to focus on the product and not waste time.” Instead of traipsing around the Valley, Soldsie met with FundersClub who dug into their numbers, interviewed them on camera, and created an executive summary-style profile for them on the FundersClub site. Gray says “they did everything way better than we could have done. It was like having a wedding planner versus trying to run your own wedding.”

Soldsie ended up taking on 72 investors who put up an average of $2,500 each through FundersClub to compose the $425,000 seed round. Gray says FundersClub put Soldsie “in touch with investors we wouldn’t have met, including high-profile people from Facebook, Pinterest, and Yammer. They know our space and will honestly be a value-add.” For example, they nabbed Jonathan Matus, a core mobile product manager of Google and Facebook, and Jason Culbertson of Yammer as investors, as well as folks from Google, Goldman Sachs, Logitech, Samsung, VMWare, Twilio, and Canonical. 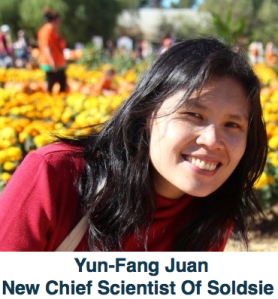 Another of Soldsie’s crowd investors wanted to meet the team before she wired them money. That was Yun-Fang Juan, an early engineer for Facebook ads and its relationship affinity modeling team who was then working for Khan Academy. She stumbled upon FundersClub through a co-worker at Facebook after doing some investing though SecondMarket, and then discovered Soldsie. Juan tells me “They had a tech challenge that I felt like I could help them with.” So along with investing, she joined full-time as Soldsie’s Chief Scientist, bringing the team up to five members.

Soldsie’s CEO and co-founder Chris Bennett says their crowdfunding hire is already solving problems, “Yun-Fang has come in and done a lot of hard technical backend engineering work that we couldn’t have done ourselves.

Launched in May 2012, 500 Startups company Soldsie lets ecommerce companies share purchase links to Facebook. Once registered with Soldsie, all a buyer has to do is comment on the post and they get emailed a purchase link. It’s a smart way to facilitate mobile ecommerce by letting people discover products on their phone and get a reminder to complete the transaction later. Bennett tells me Soldsie wants to become the “eBay of social commerce.”

With its sixth fund closed, FundersClub has now transferred over $1.75 million to a half dozen startups. Its next battle will be trying to box out equity crowdfunding competition from a partnership between AngelList and SecondMarket, who together have raised $331,000 for two startups according to SEC filings.

If FundersClub can make it easy for a wider range of people to invest in the hottest startups, and attract these companies by proving the value of the crowd, it could become a name brand in crowdfunding. That could position it as a sort of E*Trade for private companies if the rest of the JOBS Act is finalized and non-accredited investors can open their wallets to startups.