As Gianugo Rabellino, the senior director for Open Source Communities at Microsoft Open Technologies, notes in today’s announcement, VM Depot itself was built on top of Azure and “relies exclusively on published Azure APIs.” VM Depot allows developers to choose from a catalog of preconfigured operating systems, applications and deployment stacks. Some of the images available in the library currently include a Ruby on Rails stack, WordPress images, and an image to quickly deploy Riak. Developers, of course, can also build their own images and share them with others.

Microsoft Open Tech partnered with Alt Linux, Basho, Bitnami and Hupstream to get these first images up and running in the library. 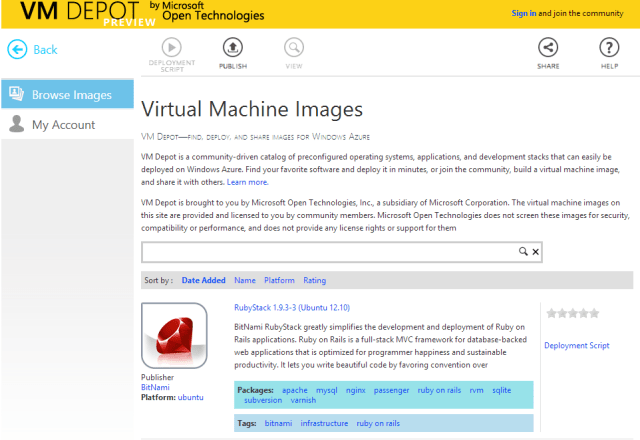 Deploying those images to Azure is pretty straightforward, though not quite self-explanatory, so anybody interested in giving this a spin should probably take a look at the documentation first.

As far as I can tell, Azure is still struggling to gain acceptance among developers, and today’s announcement may change that a bit, as it relies strongly on building a community around the service. VM Depot may also help Azure stress the point that it is essentially an open platform. As Rabellino writes:

I had a big smile on my face back in June when Microsoft announced it was making preconfigured Linux images available in Windows Azure gallery and today I have another reason to be happy as I see how Microsoft Open Technologies is helping open source communities work even more collaboratively with the Windows Azure platform.