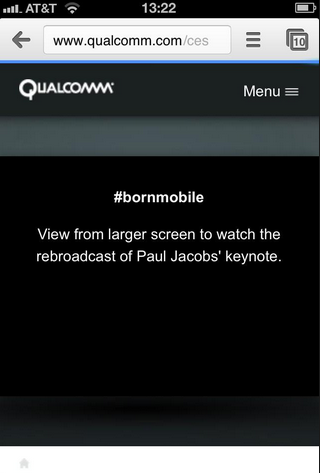 It is sad that no one who reports on technology has the balls to straight up pull a Hunter S. Thompson at CES. I mean peel away from the PR stunts and parties and just do mushrooms and walk around the iLounge or that crazy room with the 4K HDTV screens, or that weird fluorescent light tunnel with all the cars.

A person on hallucinogens would have had a great time at the Qualcomm keynote in Vegas Monday night where, jealous of the attention paid to more consumer-friendly (and absent from CES) companies like, oh, Apple, Google, Amazon and Facebook, the Saudi Prince of mobile processors threw a bunch of money at its marketing team in order to put a bunch of random shit onstage in order to get press links.

Anyways, you can’t throw a glittery iPhone case at CES without hitting a piece of absurdist Qualcomm “Born Mobile” marketing material. Which some might argue is a smart move by the company. Well, you know, sure, I now know what Qualcomm does. Except, when Twitter user Matt Croydon tried to load that crazy attention-grabbing keynote that we’ve all been talking about for three days on his (i)phone, it didn’t work on a small screen.

Just give me all your marketing money, big chip processing companies. I will use it to hire developers to stop this from happening, and maybe fire whatever people were this short-sighted in the first place. Or instead of hiring me (or anyone), just, I dunno, talk to young people instead of actors hired to play them.