It’s been clear that crowdfunding has had a big moment over the past twelve months, but new stats released today by creative project funding platform Kickstarter showed just how huge 2012 really was indie projects getting money from the larger public.

Over the course of 2012, Kickstarter says that a total of 2,241,475 people pledged a total of $319.7 million to projects on its platform — that’s a boost of 221 percent from 2011. Now, the way Kickstarter works is that no money is actually granted to a project until it completely reaches its funding goal. According to the company, a total of $274 million was actually collected for the 18,109 projects that were ultimately successfully funded during 2012. 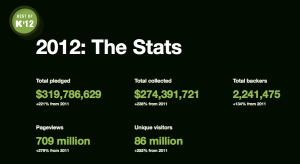 And the appeal of the Kickstarter platform is apparently reaching far and wide. The company says that people from 177 countries pitched in to pledge money to a Kickstarter project — that’s 90 percent of all countries worldwide.

The most popular category of project on the platform is music, accounting for 5,067 of all successfully funded projects over the year. Films are also a pretty big hit — 10 percent of all Sundance films last January were Kickstarter-funded, the company says.

It bears mention that not everyone is bullish about the ability of crowdfunding platforms such as Kickstarter to continue expanding at this kind of pace — the buck might need to stop somewhere. But if nothing else, it is clear that crowdfunding is striking a very appealing chord that had been missed by more traditional modes of business investment over the years. Platforms such as Kickstarter have massive appeal right now that does not seem to be flagging just yet.

The above are just a few of the keys stats from the very nifty slideshow Kickstarter put together as an overview of its growth over the past year. You can check out the whole thing right here.